This example shows a common use case and setup procedure for a system level load pull simulation. This analysis should be used to look at system level characterizations, ACPR or EVM for example, while preforming load pull analysis on a specific device in the system chain such as a power amplifier. The setup of the project is slightly more involved and outlined below. Furthermore, there are setup instructions located on both the Load_Pull_System_Template and the circuit/device Load_Pull_Template. Note that both the circuit and system simulators must be run to populate all graphs. 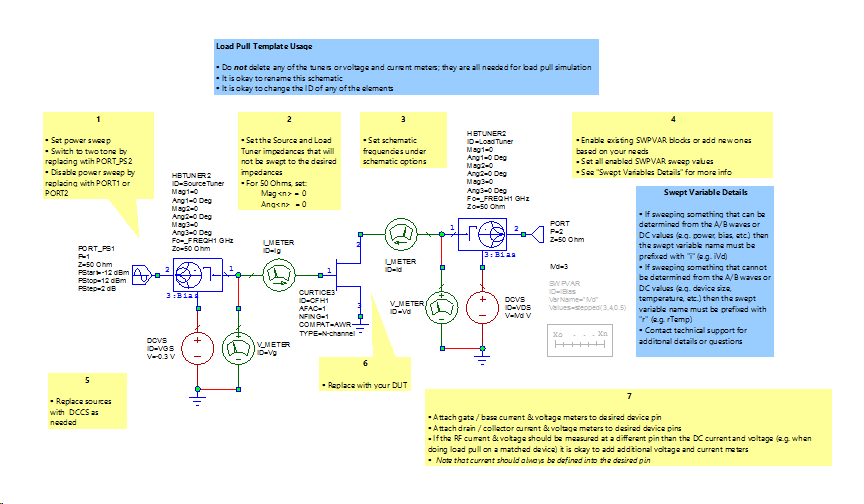 •    Follow the directions on both the system and circuit load pull templates to configure them correctly.

•    Set up the system level characterization measurements. For example, ACPR and EVM, are show in this example. A few caveats below:

o Measurements must plot a single trace per sweep, and thus waveform measurements are not load pull compatible.

•    After the load pull simulation the load pull data will show up as a data file under the Data Files node in the project browser. The data can be plotted using the new load pull measurements (Load Pull > G_******)

This is the system load pull template created from the Scripts > Load Pull > Create_System_Load_Pull_Template. This template points to the circuit load pull template via the NL_S or NL_S_ENV elements. Directions are provided on the created template to aid in the appropriate setup.

This graph shows the compression vs input power (index) for the amplifier defined in the circuit load pull template. The compression point is plotted using PlotMD_R.

This graph shows the compression from linear gain aligned to the 1 dB compression point. This measurement is plotted using the PlotMD_R_A measurement.

This graph shows the transducer gain of the amplifier defined in the circuit load pull template.

This graph plots the load gammas used during the load pull simulation with G_LPGPM.

This graph plots the power delivered to the load of the amplifier defined in the circuit load pull template.

This graph plots the power available from the source.