For the Curtice cubic model, it is possible to have Ids and gm =0 for different values of vgs.

In order to get proper convergence, both Ids and gm need to =0 for the same value of vgs.

The attached spreadsheet lets you see if a model will have any convergence problems by entering in the polynomial coefficients. From the graphs, it is easy to see if Ids and gm =0 at the ~same value of vgs. If Ids & gm do not equal zero for the same value of vgs, then you can try to find a new model, adjust the polynomial coefficients, or try to get the manufacturer to change the model.

The attached white paper gives more information on the model and its operation in Microwave Office. Based on the attached referenced paper by Dr. Steve Maas, a warning message may appear telling the user about a FIXUP taken:

This fixup causes the A1 parameter value not be computed in the model. Consequently, small signal values may turn out to be different than the values resulting from ADS model.

There is a switch that enables/disables this FIXUP parameter. By default FIXUP is enabled. The user may elect to disable FIXUP, however, convergence issues may appear due to some inadequate polynomial values (A0, A1, etc). A benefit of disabling FIXUP is that simulation results will now have better correlation with those of ADS model, assuming the model converges. To enable/ disable the A1 parameter, double click on the Curtice Cubic Element to bring up its properties, click on Show Secondary in the bottom right hand corner of the dialog and scroll down to the bottom of the resulting list. 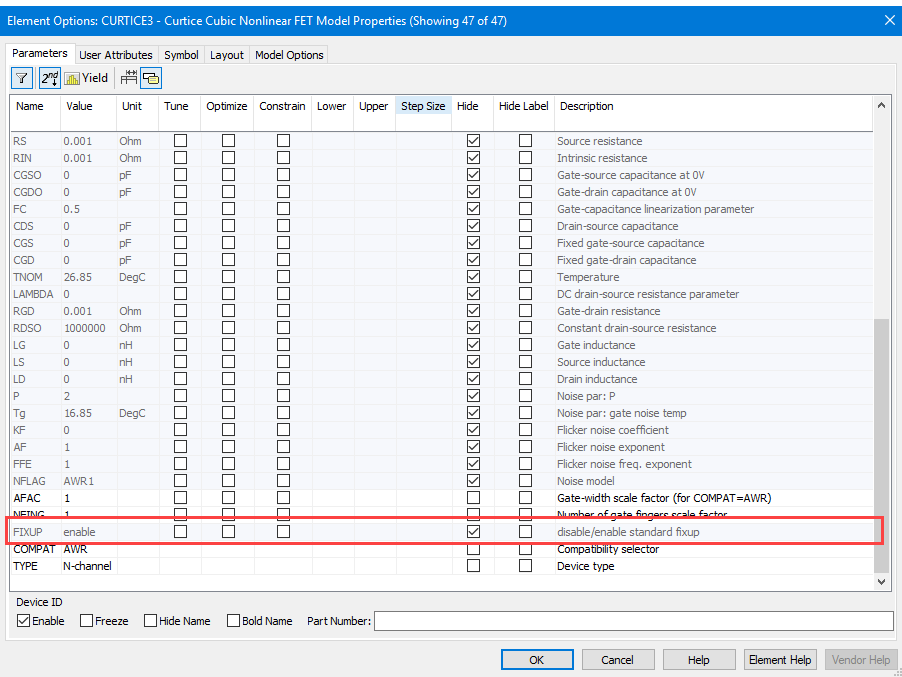