• The impact of convolutional encoding on BER performance.

• The use of a 64QAM mapper and an OFDM transmitter.

The decoder supports hard and soft decisions; the decoding mode can be selected through the DecType variable.

By default the QAM mapper will generate a gray encoded constellation of a user-defined size (M).

The OFDM_MOD model in this example uses parameters specific to the European DVB standard ETSI-30044.

The VSS BER curve (red points) in the "BER" graph will be generated faster if the spectrum measurement is disabled. 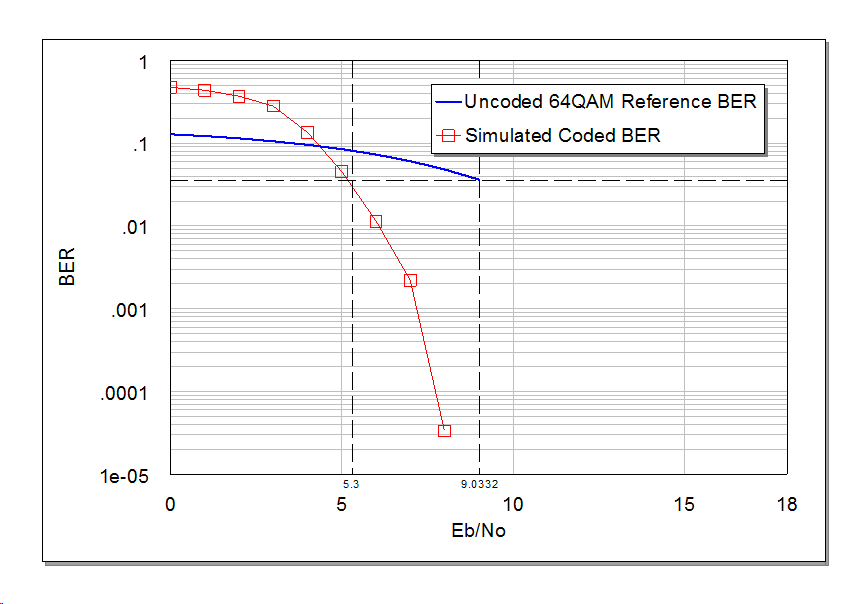 PWR, used in the AWGN block, is a swept variable defined in the BER meter.  Its value is equivalent to Eb/N0 with respect to the uncoded bits (input to convolutional encoder).

Below are shown two equivalent settings for the AWGN block:

1. PWRTYP parameter is set to Eb/N0 (dB); power level is set to PWR - 10*log10(2).  The convolutional encoder of rate 1/2 generates two output bits for each input bit. Therefore, the Eb/N0 at its output is reduced by a factor of 2.

2. PWRTYP parameter is set to Es/N0 (dB); power level is set to PWR + 10*log10(3).  The 64QAM mapper generates a symbol for every 6 (encoded) bits it receives, which is translated to one symbol for every 3 uncoded bits. Therefore, Es/N0 is equal to 3 times the Eb/N0 at the input of the system.