The BWIRES element is capable of modeling one bond wire or several bond wires that are coupled among each other.  The model is based on the EIA/JEDEC Standard 59.  It is a dynamic element, meaning that the schematic symbol changes as the number of wires is increased.  BWIRES always has one wire when it is first placed - the symbol expands to include more wires as the parameter "N" is changed.

This example shows a comparison involving a series capacitor mounted between two transmission lines, with one, two, and three bond wires.  The following procedure should be used when setting up the BWIRES element:

•    Make sure there is a Drawing Layer called "BondWires" in the Layer Setup (Options > Drawing Layers).  If there isn't one already, then it needs to be added so the BWIRE element has a layer on which to draw.

•    Open the 2D and 3D views of the schematic to view the effecst of changing parameters in the next steps.

•    Place the BWIRES element on the schematic.

•    Set the "P0" and "P1" parameters to indicate approximate wire endpoints so that BWIRE has a reasonable initial length setting (note that these parameters secondary parameters and that the user needs to press the "Show Secondary" button in the "Element Options" dialog box) .

•    Wire the element as desired on the schematic.

•    Make sure the faces of the cells to which the wire is connecting are set up reasonably.  BWIRES does not have to connect to variable faces or area pins, but it will be much easier to keep the layout connected if these settings are used.  Otherwise, the default connection point will be the center of the edge of the adjoining component, which is rarely an accurate model of the physical structure.  Use of variable faces and/or area pins allows the wires to be moved around freely while maintaining layout connectivity.

o H1/H2/H3 set the height information for the endpoints

•    Use the layout view to drag the wire(s) to the final position(s).  If you click once on BWIRES, then all wires can be moved as a unit.  If you double-click on BWIRES, you have the ability to move individual wires and/or endpoints.  As noted above, the wires that comprise a BWIRES element do not have to be parallel.

Wires do not have to be parallel, nor do they have to terminate on the same schematic elements.  For example, two M3CLINs could be connected by a single 6-wire element, with two wires connecting to each pair of lines.  Each wire must have the same shape parameters (Alpha, Beta, H1, H2, H3, D1_Ratio, D2_Ratio) but the positioning is completely arbitrary.  Note that with the new BWIRES2 element added in AWR2006 each wire can have a different shape parameter.

The results show the effect of adding wires or, effectively, reducing the inductance.

Shows a single bond wire attached between a capacitor and a transmission line. 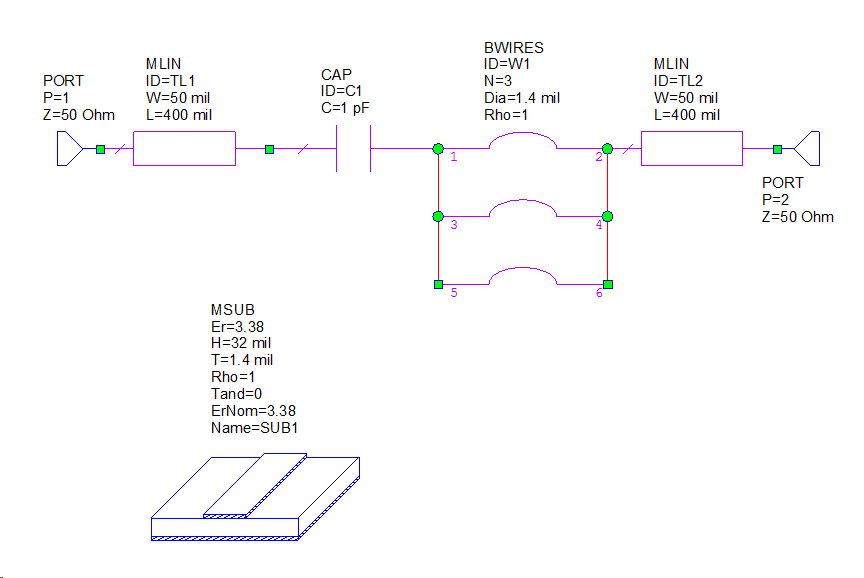 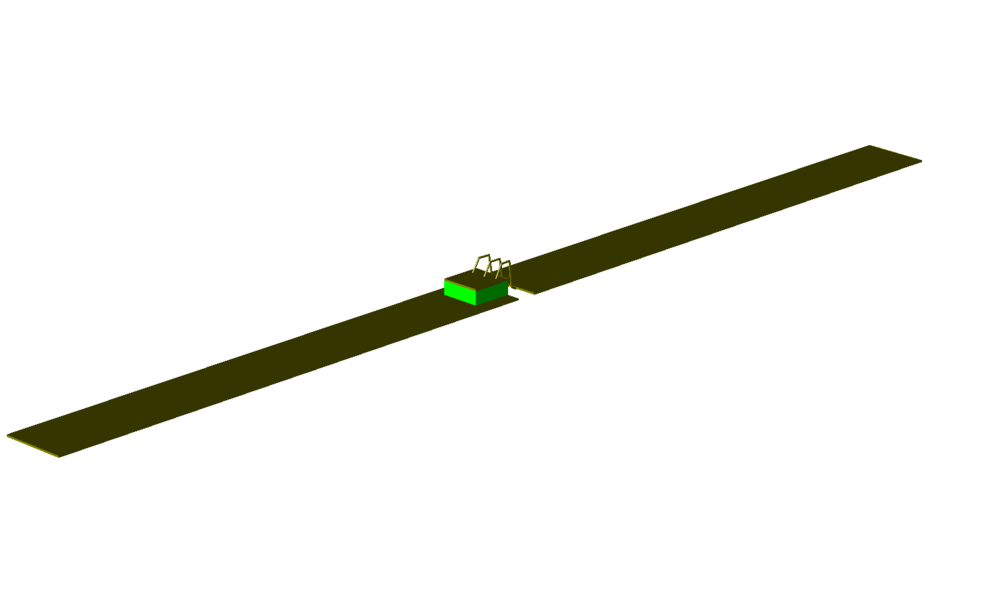