This example makes use of the VSS convolutional encoder.  The BER meter is used to sweep Eb/No. Take note of the settings of the AWGN channel model. The level of Eb/No is scaled by -10*log(2) since the rate 1/2 convolutional encoder  generates two output bits for each input bit. Thus, the Eb/N0 at its output is reduced by a factor of 2.

After the signal is received the IQ port of the RCVR block is fed directly into a QAM_SFTM block, and its output is used to drive a SYM2B_SFT block.  The output of the SYM2B_SFT then drives a VIT_DEC. The combination of these three blocks in effect creates a soft decision Viterbi decoder. If the digital output port of the RCVR is used to directly drive the VIT_DEC block then, in effect, one would have a Viterbi hard decision decoder.

A reference BER of un-encoded QPSK along with a BER curve from a previous BER simulation are shown in the BER graph.

The VSS simulation results agree with results shown in "Digital Communication Technique" by Simon, Hinedi and Lindsey. Please see page 858 figure 13.18 of the above mentioned book. 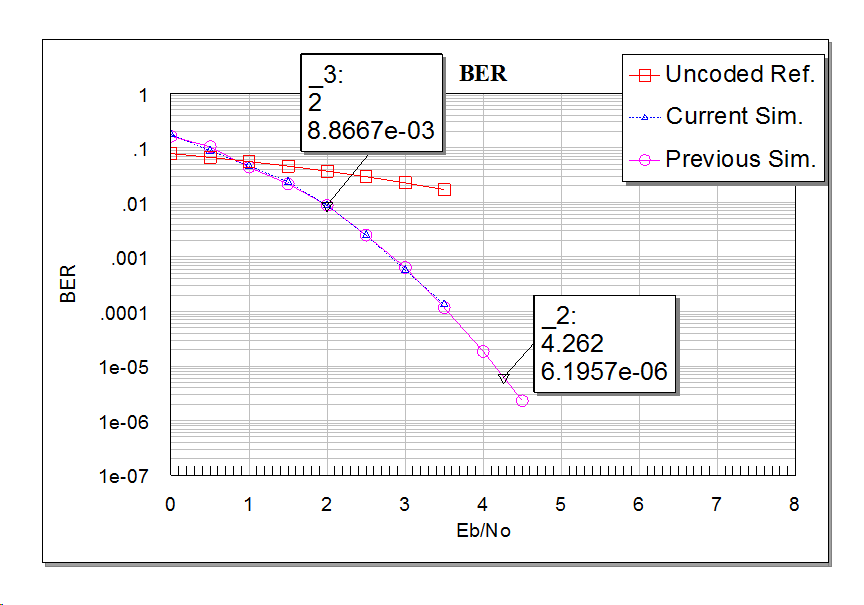