The Linear and Nonlinear Modeling of a Microwave Oscillator

This tutorial describes the conceptual design flow of a 17.26GHz oscillator using a microwave FET.  The design process is broken down into four steps: develop the negative conductance source; design a passive resonator; adjust the resonator’s and source’s admittances so that the oscillation conditions are met at the desired frequency; run a full nonlinear simulation of the steady state oscillator, including determining the oscillation frequency and the close-to-carrier phase noise.  The FET selected for the design tutorial uses the TOM1 device model.  The purpose of this work is to illustrate by example the use of MWO in designing oscillators.  For a more detailed description of oscillator concepts, the designer is advised to refer to the standard text books and technical papers

In this tutorial the so-called reflection topology of an oscillator will be developed. In this design methodology, the oscillator is broken into two sections: an active source, and a passive, resonator structure.  The initial oscillator design is carried out using linear design techniques.  The final design is verified with nonlinear simulation.  The source is seen at the input to the resonator as a negative conductance.  Since the resonator has almost zero conductance, the net conductance is negative, and the circuit is unstable at the frequency determined by the resonator.  Note that it is natural to describe the circuit properties in admittance rather than impedance, because of the parallel representations of the resonator and source.

In theory, the oscillation frequency is where the total susceptance is zero.  In practice, the frequency where this condition is met will be different than that predicted from the initial design using linear modeling.  A nonlinear, steady-state simulation is therefore carried out to determine the final, actual properties of the oscillator.

The tutorial is broken up into four steps for carrying out the oscillator analysis.  The first part focuses on understanding the source of negative conductance, which is a properly configured FET.  The second part explains the LC resonator structure used.  The third part brings together the resonator and negative conductance sections, and the oscillation frequency is thereby predicted based on simple analysis.  The fourth section simulates the steady-state operation using a nonlinear model of the FET.  The actual oscillation frequency is determined, along with the close-to-carrier phase noise.

Here, we will focus on developing the source of negative conductance.  The schematic “Active_Device” shows a commonly used topology for a microwave FET oscillator.  The gate of the transistor is terminated with a lossless transmission line.  The length of this transmission line is defined by an equation, which in turn has been set up for tuning.  The equation is to be found in the "Global Definitions" window.

A frequency range of 15GHz to 20GHz has been defined for the analysis, as this extended range gives some insight into the wide band performance of the source of negative conductance.   One problem that may occur when a more practical resonator model is used is that the resonator may possess many resonances.  With these resonances, albeit parasitic resonances, it is possible for the oscillator to be trapped or “stuck” into an unwanted mode of operation.  Having visibility of the wideband nature of the negative conductance and the wideband behavior of the resonator can help avoid this pitfall.

Both a Smith chart plot and the admittance rectilinear plots have been used to show the negative conductance.  (Please see the graphs "Step 1 Active Device" and “Step 1 S11 of Active_Device” and “Admittance Plots”.)  With the rectilinear plot both the real and imaginary components of Yin(1) are being displayed.  One aspect of this design becomes apparent; the susceptance of the device is the about the same magnitude as that of the negative conductance.  This is due both to the device and the relatively low capacitance of the resonator, which also implies a low loaded resonator Q. This will result in the pulling of the operating frequency both during the start-up phase and the steady-state phase.  As the power increases, the device susceptance will be seen to change under higher drive conditions, which means that the steady-state and start-up frequencies will differ.

With the “Resonator” schematic we can see that a very simple parallel LC network is used as the model.  Some loss is included with the inductor.  The schematic shows S11 for the resonator in a Smith Chart, and the input admittance to port 1 of the resonator.  Please see the graphs  "Step 2 S11 of resonator" and "Step 2Resonator Admittance".

To establish the start-up conditions it is necessary to combine the resonator and the source of negative conductance into a single circuit and view the total conductance.  During start-up the system is excited either by noise processes and/or bias circuit transients.  Assuming that there is excess negative conductance, these excitations will be amplified.  The start-up frequency can be assessed from the small signal model of the system.

The equation that defines the oscillation is of the form ....

The equation capability of the AWR Design Environment has been used to define two variables that can be used to display the total conductance and the total susceptance of the combination of the active device and the resonator: Total_Real and Total_Imag.  In “Output Equations” can be seen the various measurements used, and the equations derived from them.  The two graphs, “Step 3 Total Admittance” and “Step 3 Admittance Plots” give a complementary view of the behavior of the combination of the resonator and the active device.  The start-up frequency can be seen to be around 17.76 GHz.

In this final step, the actual operating frequency and power of the oscillator are to be established using the schematic named “Oscillator”.  Also calculated using this schematic is the close-to-carrier noise of the oscillator, which can only be calculated under steady-state conditions.  Having checked that there is a net negative conductance over the frequency range of interest and the sum of the susceptances becomes zero at one frequency, and only one frequency; then steady-state operation is possible.  To establish the operating point using an automatic measurement, we place the OSCAPROBE between resonator and negative conductance generator.  When the steady-state operating point has been established by the OSCAPROBE element, the OSCNOISE block is used to calculate the phase noise properties of the oscillator.  Thus, the measurements used for this schematic can be used to predict the nonlinear oscillation frequency, output power, and close-to-carrier phase noise.  As mentioned before, the difference between the resonator frequency, the start-up frequency and the steady-state frequency can readily be seen in “Step 4 Spectrum” and "Step 4 Phase Noise". 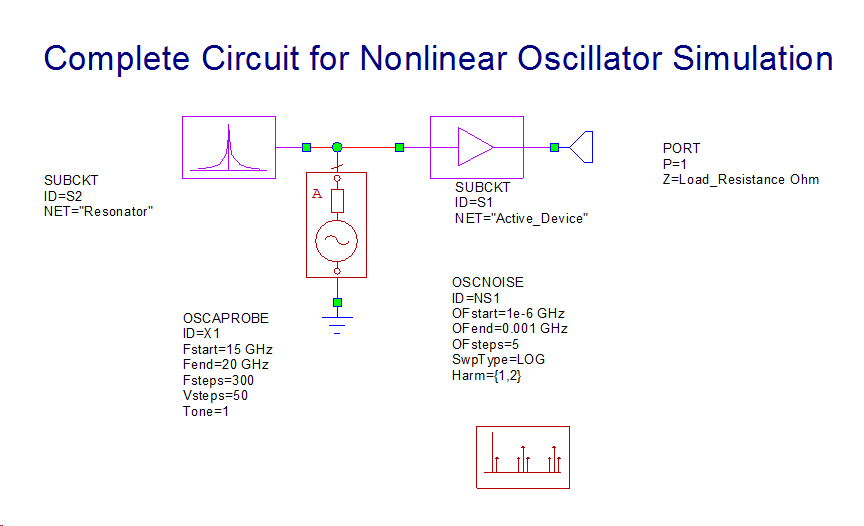 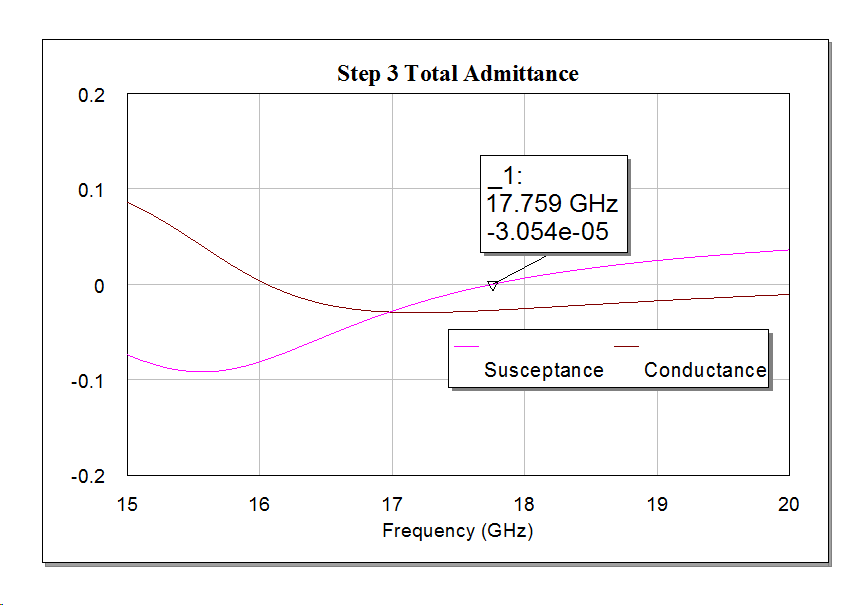 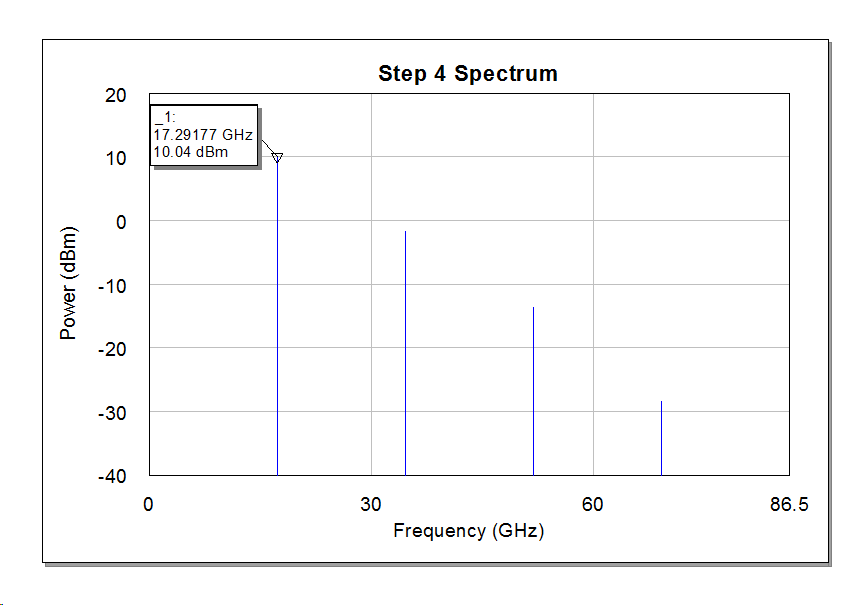 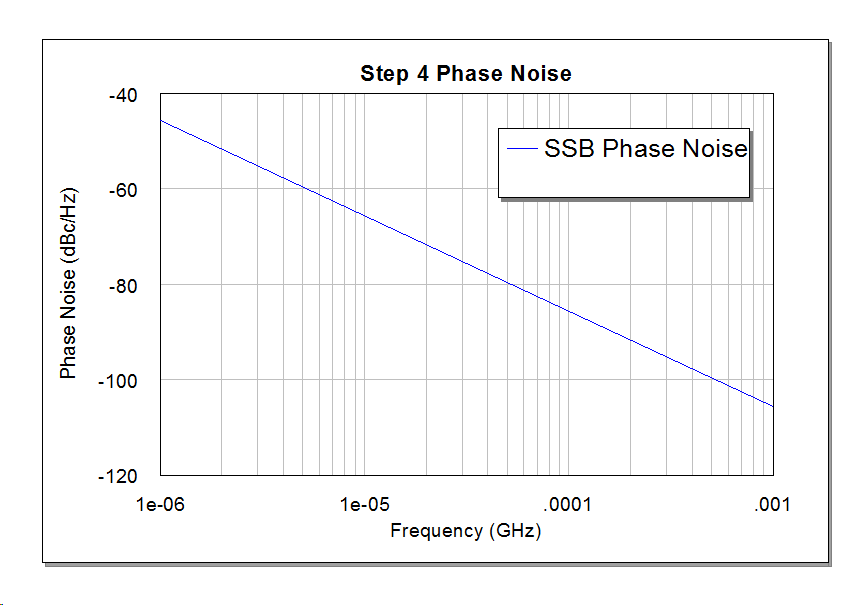