This example shows how to use the Load Pull script.  The example device used is a Curtice FET model.

At the center of simulated load pull is the load pull template. Once created, sweeps for power, bias, and harmonic impedance can be activated by toggling on and off the correct SWPVAR blocks and simulating, generating a Generalized MDIF (GMDIFD) swept load pull file. DUTs can be easily changed in the load pull template by swapping out a particular FET model for the current default device (the CURTICE FET).

This project contains a power swept load pull file, LP_Data, which can be used to view the functionality of the load pull measurements without a simulation. In order to run bias or harmonic impedance sweeps a load pull template will need to be created, discussed below.

Note that the output from the Load Pull is saved under “Data Files” and can be exported from the project to be used elsewhere. 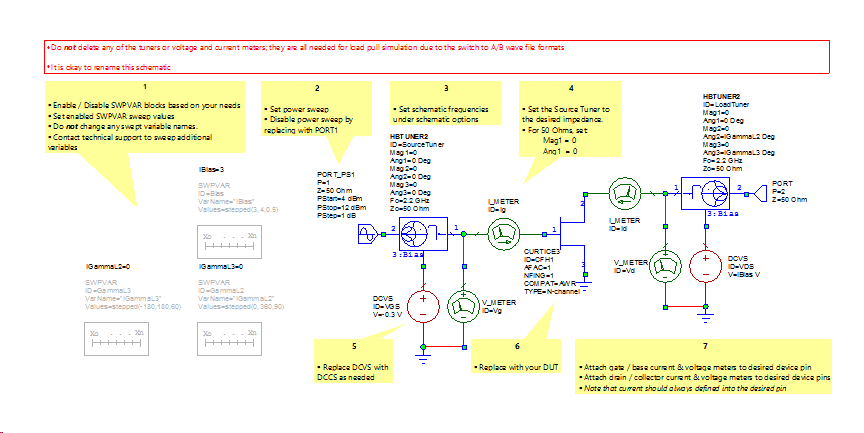 The first dialog is used to set up the gamma points for the load pull simulation. Custom gamma points can be created, specifying the density and distribution across the smith chart, viewable from the smith chart titled _LP_Gamma Points_. Once the appropriate impedance points are create select the ‘>>’ button.

The next dialog allows the selection of Source and Load tuners and the voltage and current meters used in the simulation.  Set these according to your load pull template configuration.  Note that if no changes were made to the names of the tuners and meters in Load_Pull_Template then all the fields in this dialog will default to the correct value. From this dialog the load pull data file produced from the load pull simulation can be named, and the number of harmonics stored in the data file can be chosen. After the setup is complete, push the ‘Simulate’ button.

When the simulation is complete the new swept load pull file will be produced and shows up under the Data Files node in the Project Browser.

This schematic shows the device load / source pull setup using HBTUNER2 elements along with current and voltage meters for the Gate/Base and Drain/Collector. SWPVAR blocks are available for toggling on and off bias and harmonic impedance sweeps.

Note that additional templates can be added to the project at any time by choosing Scripts > Load Pull > Create_Load_Pull_Template.

This graph shows the Power Added Efficiency (PAE) plotted against the power delivered to the load (Pload). The quantities are computed directly from the LP_Data GMDIF swept Load Pull file and plotted using the PlotMD_R. PlotMD_R allows for the direct visualization of a real-valued quantities computed directly from an ABwave formatted GMDIF file and is available as a measurement in the Data section.

The grey traces are all possible swept values of PAE vs PLOAD, whereas the blue trace is tied to marker m1, located on the Contours graph (denoted m1@Contours in the PAE vs Output Power legend). These measurements are inherently tied together with the use of the marker, and dragging the marker to a different gamma point on the graph Contours will cause an update to the blue trace in PAE vs Output Power, which will correctly reflect the appropriate value based on the gamma selection. 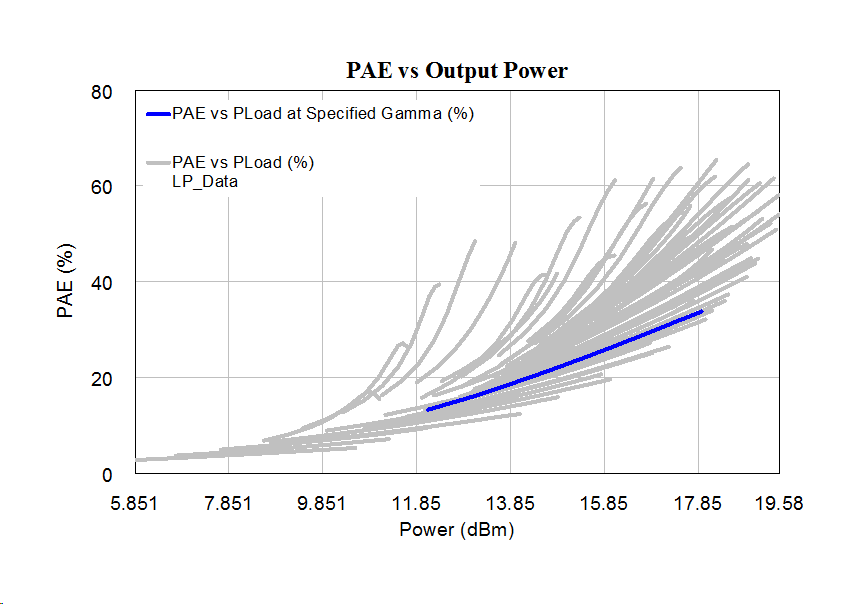 This graph shows the power level of the input signal against its sweep index. The point of this graph is to validate the load pull simulation power sweep and to allow for the creation of a marker, which is then used to update the contours for PAE and PLOAD specified in the Contours graph. 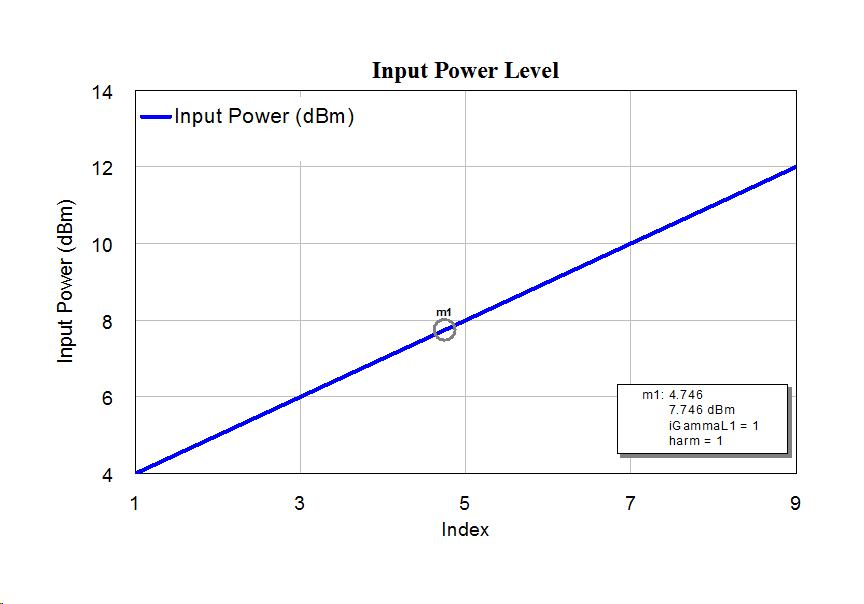 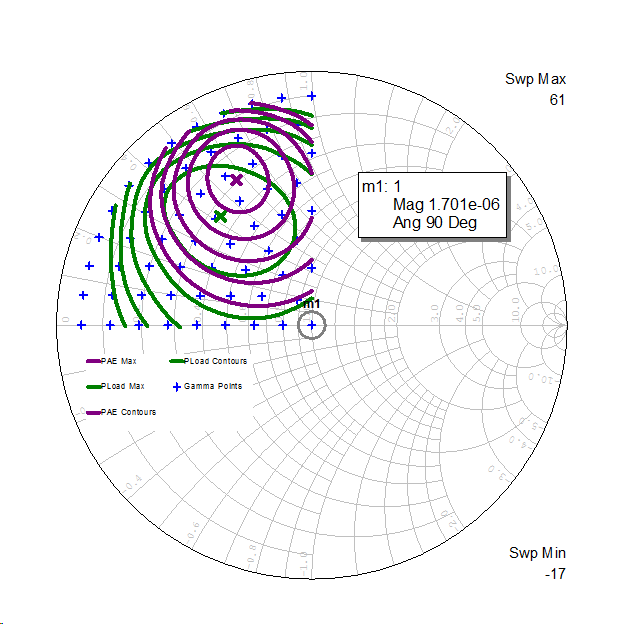 Load pull data can be viewed via measurements.  These measurements are found under the “Load Pull” or “Data” heading.

G_LPCM: This commonly used measurement plots the contours of the selected calculated value and is intended to be used with the Smith Chart.  The data file, calculated value to plot, contour step size, max number of contours plotted, characteristic impedance and sweep reference must be specified.

G_LPCMMAX: This measurement plots the maximum value of the selected calculated value and is intended to be used with the Smith Chart.  The data file, calculated value to be plotted, and characteristic impedance must be specified along with a specified sweep reference.

PlotMD_R: This measurement allows you to visualize a real-valued data from a swept load pull file. This includes calculated values, such as PAE, which can be selected from the measurement dialog.

Optimizer goals can be set up for this measurement to optimize on circuit parameters in the schematic for a desired measured data level (for example, optimizing the parameters of a matching circuit to obtain maximum power added efficiency).