This project illustrates the use of basic VSS blocks to construct a 2.45 GHz ZigBee transmitter that has the same functionality as the system shown in the figure directly below.  It also shows how to introduce amplitude imbalance, phase imbalance, and DC-offset to the TX signal through use of the "Input Imbalance" subcircuit, which can be found in the Elements tree under System Blocks/Libraries/RF Blocks. When the simulation is running, an EVM measurement is performed as you tune on DC-offset, Amplitude Imbalance, and Phase Imbalance.

The 2Mchip/s signal is created in VSS by multiplying a 250kHz data signal (RND_D) with a PRBS that is operating at 2MHz. The DAC blocks are used to ensure that the sampling frequency registered at both inputs of the multiplier is the same as well as change the incoming signal's polarity from {0,1} to {1,-1} . (Sampling Frequency = Data Rate * Samples per Symbol). The real to digital block takes the {1,-1} real data and converts it to digital data prior to going into the OQPSK_TX block.

The OQPSK_TX block has its pulse shape parameter (PLSTYP) set to Half Sine and its center frequency set to 0GHz. The output of the transmitter is passed through an "Input Imbalance" block that allows you to simulate imbalance on the in-phase (I) and quadrature (Q) rails.

The output of the imbalance block is connected to an RF attenuator of 15dB. A VSS behavioral mixer (MIXER_B) and a TONE source are used to create the complex envelope of the 2.45GHz modulated signal. MIXER_B internally splits the complex baseband waveform coming into it into individual I and Q rails as show in the figure below. 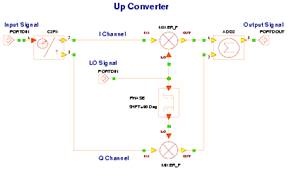 The output of the mixer is then fed into a linear gain block as well as a non-linear amplifier (AMP_B).  The signal align block (ALIGN) is used to scale the measured signal relative to the reference signal prior to making an EVM measurement. The EVM calculation is performed via use of the VSA and the EVM measurement window.

As you tune on the imbalance parameters and DC-offset you can improve or degrade EVM results. As the simulation is running you can monitor the data, the average RMS EVM in percent, the pulse shaped signal, the reference IQ plot versus the measured IQ plot, and the output spectrum. A ZigBee output spectrum from R&S test equipment is shown below for reference purposes. 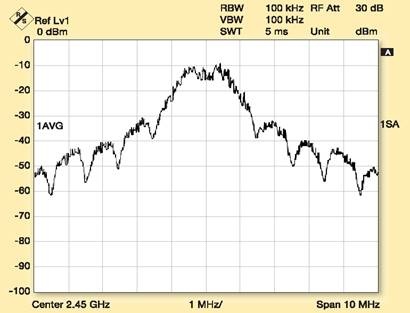 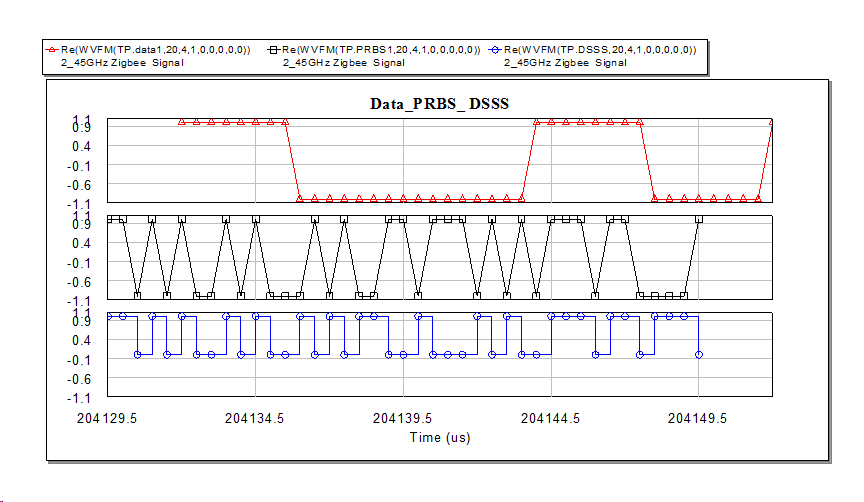 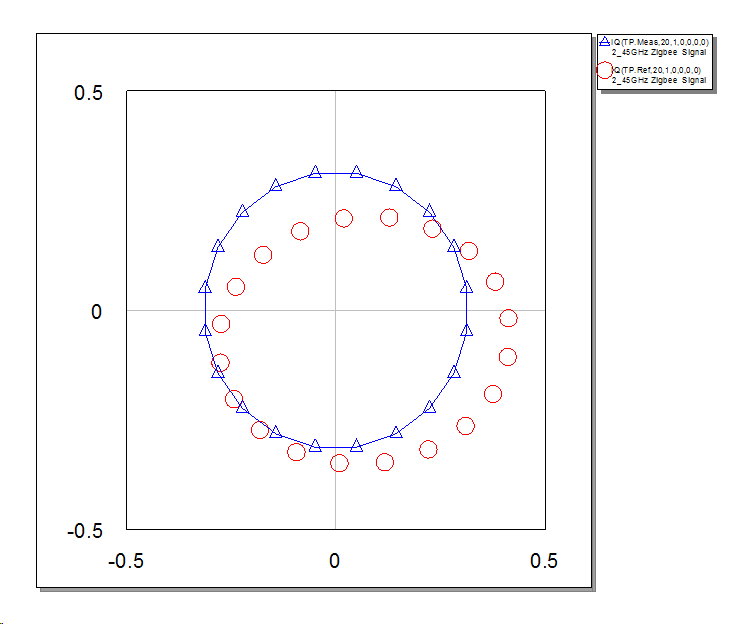