Why Can I Not Select a Ratline to Route an iNet

Why Can I Not Select a Ratline to Route an iNet?

Another possibility is that you have access to the functionality (i.e. the appropriate feature exists in your license file) but the feature is not being used. See the second article, specifically the top section, for more information if this is the case.

The other thing to check, assuming that you have the license feature for iNets and the feature is being used, is that you are not restricting the selection of iNets as in the following dialog: 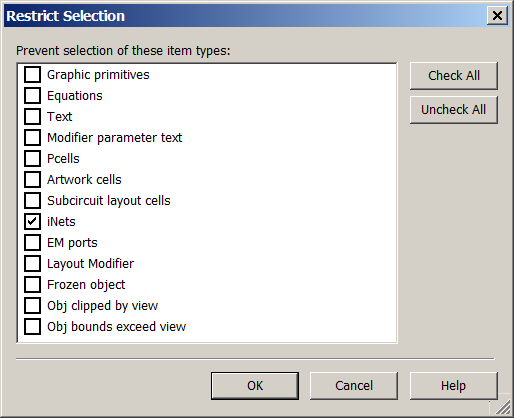 To access this dialog, simply left-click somewhere in the schematic layout window and select Restrict Selection. Make sure you uncheck this box and hit OK so that you can double-click on ratlines and route iNets. The second part of the second article below contains information on iNets and ACE as these features relate to AWR 2010 (Version 9.03) and later.