Tip of the Day

Starting in V13, you can now run circuit envelope simulation directly from Microwave Office.  New sources and measurements enable circuit only simulation to get results.

The shipping example below is a great reference for using this feature.

This example demonstrates a circuit envelope simulation of a multi-carrier QPSK modulated signal using a Freescale MRA0500-19L device.  As is important with any circuit envelope simulation this device was simulated in the time domain and the performance was verified against the frequency domain performance.  The verification was done in the example Circuit_Envelope_Cosimulation_with_VSS so we did not include it here as well.

The multi-carrier QPSK signal was generated from the system diagram QPSK_Generator.  This system diagram does require a VSS license, but simulating circuit envelope in APLAC with the generated I/Q data does not require a VSS license, only the appropriate APLAC license.  If any errors appear regarding VSS licensing, simply disable the PWR_SPEC measurement in the QPSK Spectrum Verification graph.  It is only needed to verify the input to the APLAC circuit envelope simulator is correct.

QPSK_Generator - System diagram that generates the multi-carrier QPSK signal.  The FILE_SNK element captures the I/Q data and writes it to the datafile Multi_Carrier_QPSK.

Envelope_TB - Uses the PORTIQ_ENV port to source the amplifier with the multi-carrier QPSK signal.  The PORTIQ_ENV source uses the datafile Multi_Carrier_QPSK that was generated in the QPSK_Generator system diagram.  The Pwr parameter is left blank so the total power in the source is the same as when the I/Q data was captured.

HB_TB - A swept input power and frequency harmonic balance simulation of the amplifier to show the BJTs continuous wave performance.

High_Power_BJT_Amp - The amplifier we are simulating including the bias network as well as the input and output matching networks.

CW Gain - The sine wave gain of the BJT amplifier across frequency.

QPSK Fundamental Carrier Voltage - The time domain voltage of the Fundamental carrier at the input and output.

QPSK Gain and Average PAE - The total power gain and power added efficiency of the amplifier when driven by the multi-carrier QPSK signal.  The method of computing the gain is comparing the integral of the power spectrums at the input and output.  The method of computing the power added efficiency looks at the instantaneous input, output, and DC powers.

QPSK PAE vs Time - The instantaneous power added efficiency of the amplifier over the full duration of the modulated signal.

QPSK Spectrum - The envelope input and output spectrum of the Fundamental carrier and the original VSS waveform spectrum.

QPSK Voltage Waveform - The envelope voltage over time of the QPSK signal at the input and output of the amplifier. 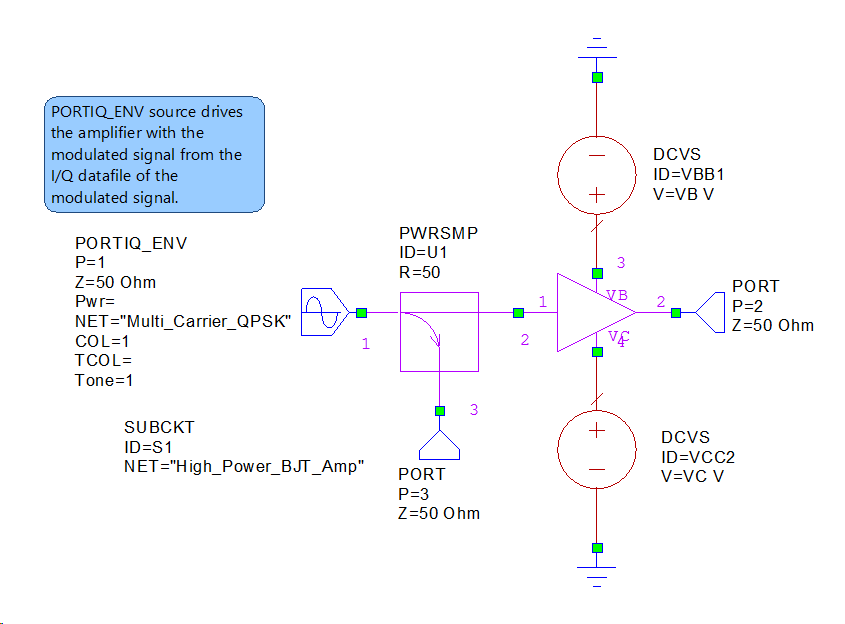 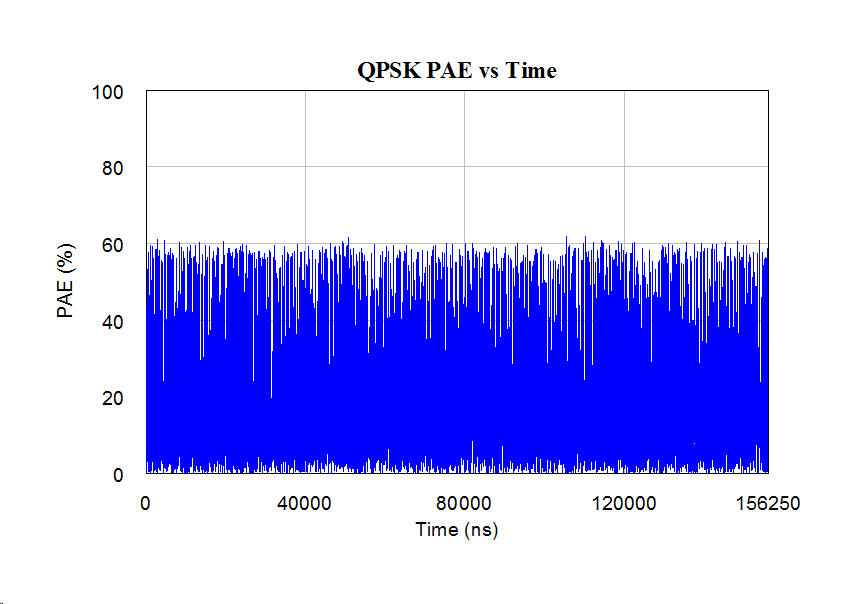 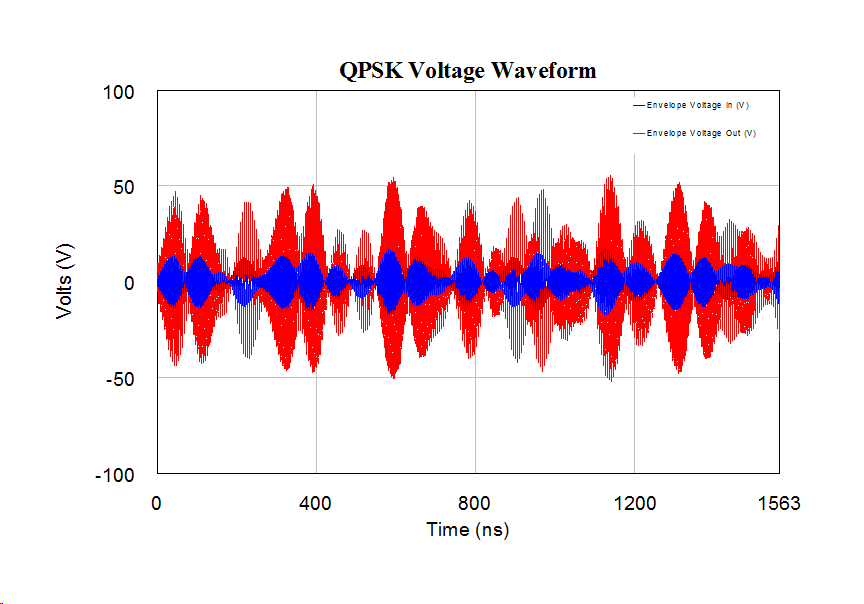