NI AWR's Script Development Environment (SDE) allows you to create and execute macros and utilities to automate complex tasks from within the NI AWRDE. The SDE supports scripting in Visual Basic and includes syntax highlighting and powerful debugging capabilities. 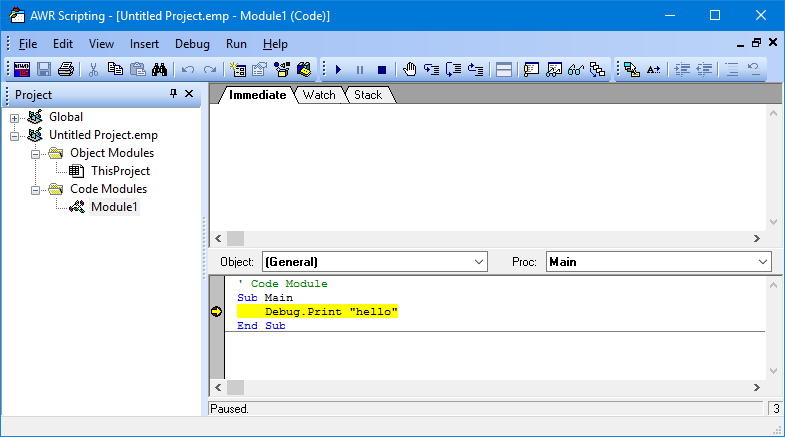 The components of the SDE are described in the following table:

Shown in the scripting browser with the name of the project, in this example “Untitled Project.emp”.  Local scripts are saved in the project, so if you copy your project file to another machine, your scripts are automatically included.

Scripts stored in the Scripts or ScriptsUser folders are included in this. From the NI AWR Design Environment, select Help > Show Files/Directories to find these folders. Scripts folder contains the factory scripts shipped with the product installer.  ScriptUser contains global scripts that the user manages. Global scripts are available to all projects. The Global subnode contains all global scripts that are stored separately in individual *.bas files located in specific folders on your computer.  You can add a new *.bas file to your ScriptUser folder, then right-click the Global node and choose Check For New Files to make the new script available.

The code can either be in code modules or object modules.  Code modules contain procedures that run from start to finish when executed.   This is useful for creating macros or procedures for automating tasks that you would normally perform manually.  Each module will begin with a 'Sub Main' and each code module is listed the project browser as a separate item.   To create a module, right-click the Global or the local node and choose Insert Module.  A new module is added to the node and a new window will be opened with the 'Sub Main" defined.

An Object module runs code in response to events generated by the NI AWRDE object. Object modules do not have a Sub Main that executes when they run. Instead, they contain special functions called Event Handlers that execute in response to events that objects start. When run, the Basic engine waits for an event to occur, such as adding a schematic to the project. When the event occurs, the associated event handler code executes.

To enter code that responds to an event, expand the project tree for the local scripts, into the Object Modules node and double click on the node named ThisProject.  Note: we do not support global object modules at this time.   In the code editor window, select the object that starts the event from the object list (this will be called Project for events from the AWR API), and then select an event from the Proc list. After you select an event, a handler procedure is added to the module and you can add any additional code you want to execute. The following figures show this process. 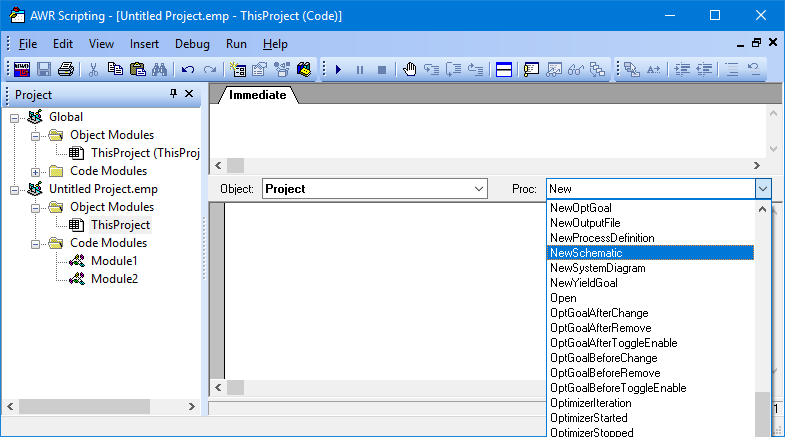 Before the code can respond to events you must run the module by clicking the Run button on the toolbar.

Next time you open the project containing object modules, a  dialog box will appear asking if you would like to Enable or Disable macros. 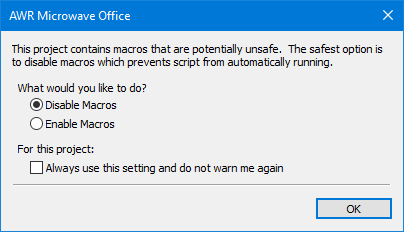 If you choose Disable Macros the object module will not be running.  You can immediately edit the code and you will need to click Run on the toolbar to be able to respond to event.

If you choose Enable Macros, the object module will be running.  You will need to click End on the toolbar to be able to edit the code and the NI AWRDE will be automatically responding to events.

The NI AWRDE object library is selected by default and references must be set for the object module and each code module separately.   Each checked reference is searched in order from top to bottom. 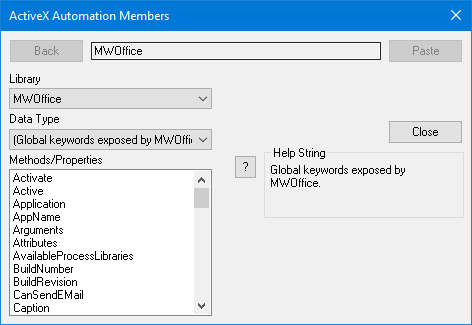 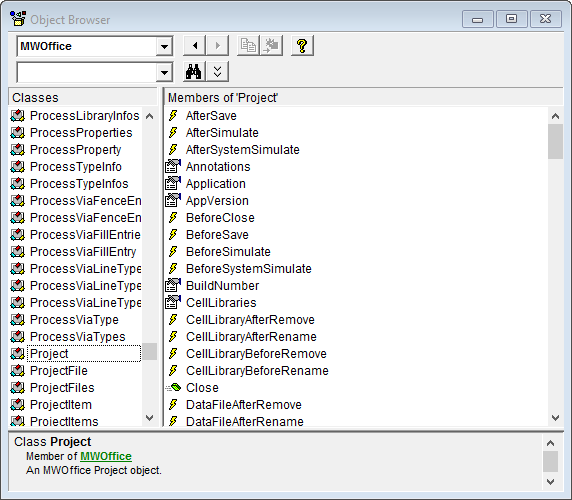 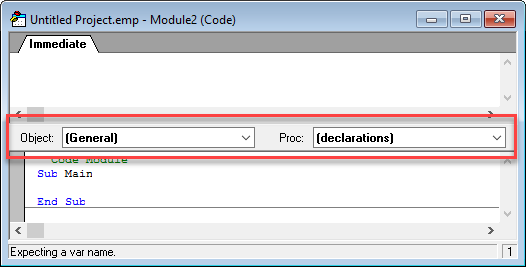 The object list shows all the objects for the current module 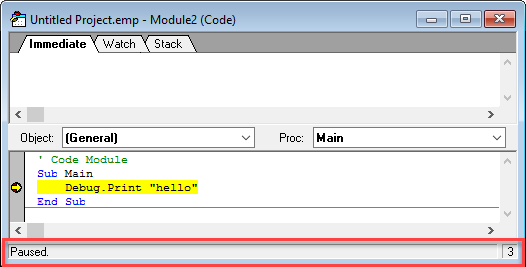 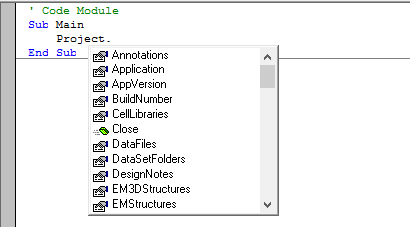 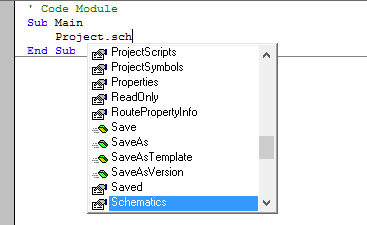 To see language extensions, built-in instructions/functions and user-defined procedures/variables press Ctrl-Space on a blank line in the IDE. 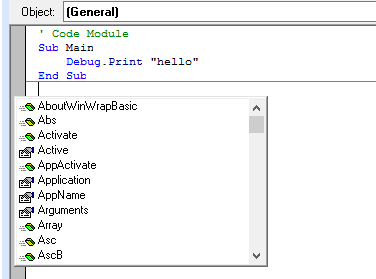 If you want to reference subroutines or functions in other *.bas files, there are several options. This can be a good way to track common groups of code you want to reuse and easily update.

The path to the file can be an absolute path or a path relative to the NI AWR Project file in which you are working.  The disadvantage of this approach is that you cannot debug into any referenced functions.

When typing code, press the F1 key to display Help for the specific word the cursor is over. If the cursor is over a component that belongs to the NI AWR API, the NI AWRDE Help opens to the appropriate section.  Newer Microsoft operating systems do not support the help system build into the current SDE.  We recommend you use the PDF documentation to understand the SAX basic specific commands. 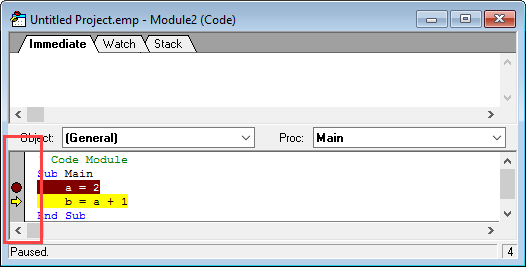 When your code has stopped at a breakpoint, you have various options, the options are available from the Debug menu.   See the menu listings below for the hotkeys. 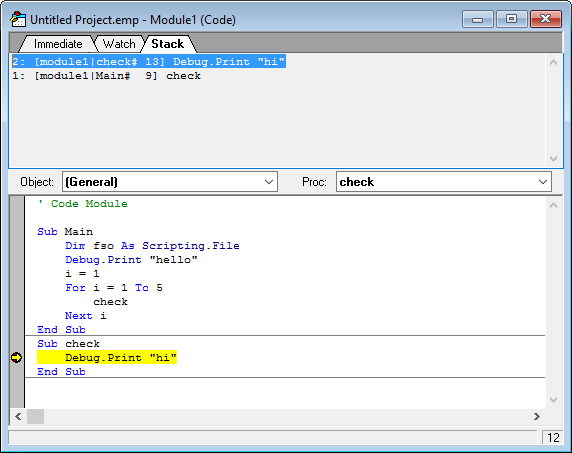 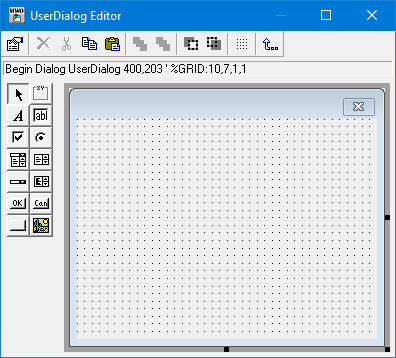 Use the controls on the left to add items to design your form.  Hover your mouse over each item to understand what they are for.   When you are done, close the dialog and the code for the form will be inserted into your script. 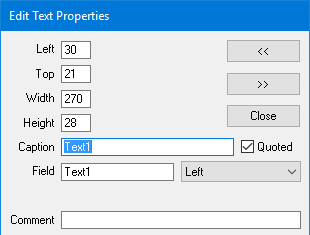 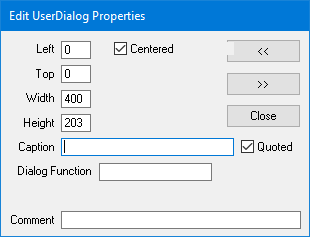 The Caption field will be the name of the dialog and the Dialog Function name is to reference the function to do advanced dialog controls. 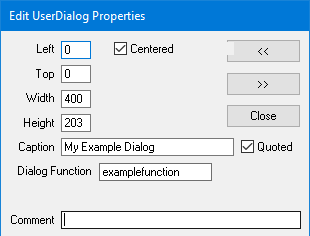 When closing the dialog with the Dialog Function field filled, you will get the prompt below.    You usually would click next and then the shell of the dialog function code will be added. 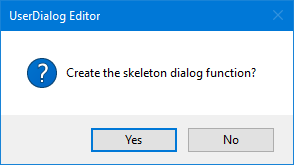 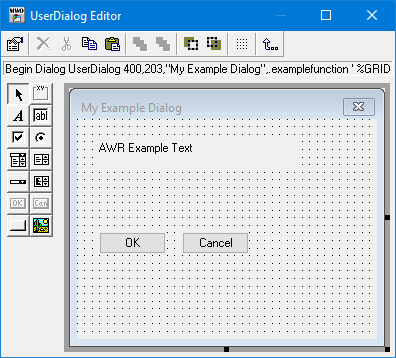 You can run scripts directly from the NI AWRDE Scripts menu.  Scripts display either one of three areas.

The list that displays is in the format<module name>(<sub name>). Any Sub in a given module that takes no input arguments is available in this list. You can hide any such sub by using the Private declaration before the name of the subroute. For example, the following figure shows a macro named "example" that has three sub functions, a,b, and c.

Notice that the third sub is declared private. If you choose Scripts > Project Scripts you can access only the first two sub functions as shown in the following figure.

You can control how scripts display in the Scripts menu. Above any Sub you can add a line that defines the folder in which to display the script. This line is in the form '$MENU=name where name is the desired folder name. The name of the sub displays under that folder. You can use the folder name "hidden" to prevent that sub from displaying. For example, you can add the line "' $MENU=Data" to display this script under the Data sub menu. Only one level of folders is allowed. When you use this syntax the script is only in this folder; it is no longer in the Scripts > Project Scripts or Scripts > Global Scripts folders. Because of this structure, NI AWR recommends that you write your scripts with one Sub Main that uses the hidden folder tag, and then give your code a meaningful name that you then call from the Sub Main. This is because you need a Sub Main to run the script from the SDE, but you want a meaningful name when running the script from the Scripts menu. The following example scripting code demonstrates these various concepts.

The following figure shows how this script displays in the NI AWRDE menu.