This tutorial describes the design methodology of a 6.6 GHz oscillator circuit in LTCC technology.  It combines the use of EM analysis of the interconnection vias and the cavity resonator and circuit level models.  The resonator is made in LTCC technology using flat plates and via walls to create a cavity.

This project uses an example of a 6.6 GHz oscillator circuit to demonstrate the OSCTEST and OSCAPROBE elements for oscillator analysis.  The project is broken up into two sections, with the first section showing the OSCTEST element, and the second section showing the OSCAPROBE element.  The fundamental purpose of each element is to determine at what frequency the oscillator will work.  Once the frequency is determined, various other measurements can be performed, for example power analysis.  The OSCTEST element works by “cutting” the feedback loop.  The designer can then discover when oscillation conditions are met.  It can be used in either a linear simulation mode or a nonlinear, harmonic balance, simulation mode.  This example uses a nonlinear simulation. The OSCAPROBE is designed to automatically search for the oscillator’s frequency of operation and voltage level in the feedback loop.  It is recommended to use the OSCTEST element early stages of the design, and use the OSCAPROBE element in the final stages of design verification and tuning.

The oscillator is realized in LTCC technology.  A cavity resonator made out of parallel plates and a via fence is used.  This is simulated in EMSight, and a lumped equivalent model is developed.  The vias in the LTCC are also modeled by using the results of an EM simulation.

The design process is split into two sections.  The first section makes use of the OSCTEST element to initially determine the potential for reliable oscillation, and finally to make an assessment the oscillator's frequency and output power under steady-state conditions.  The OSCTEST element works by cutting the feedback loop used in the design.  A signal can now be injected through the element, and the loop characterized.  In a linear mode of operation, the designer can see the gain of the loop and its phase, by looking at the appropriate S parameter.  In a nonlinear mode of operation, power is inserted into the loop, and adjusted until the oscillation conditions are met (0 dB loop gain and no net phase change).

When these conditions are met, the output power and spectrum are those of a free-running oscillator under steady-state conditions.  This methodology can therefore be used to evaluate the behavior of autonomous circuits; such circuits cannot readily be simulated with the Harmonic Balance algorithm without special treatment.  The power can be set to low levels to see that the start-up requirements are also met.  See AWR's application notes for further information on using OSCTEST to design RF and microwave oscillators.

The schematic "1_Manual Operating Point Tests" is used for the initial design work with OSCPROBE.  Power is injected into Port 1 of the OSCTEST element over the frequency range 6.3GHz to 6.9GHz.   (The frequency range has been set in the project options.)  When the power level has been set to the correct magnitude, the loop gain plot will pass through the point (1,0); this is most easily seen in the polar plot of the loop gain, “Loop Gain Polar” and in the rectangular plot “Loop Gain”.  The manual process of establishing the power level may take some time, as several trials will be needed to assess the circuit behavior.  Nevertheless, the designer is able to see the changes in gain as the power level increases, and at the same time checking that the negative resistance saturates in the correct fashion.  The power spectrum of the output of the oscillator is shown in the graph “Output Spectrum”.  The measurement has been set up so the tuner may be used to shift between different simulation frequencies.

The use of the OSCAPROBE element is shown in the schematic “2_Automated Oscillator Tests”.  The OSCAPROBE element is placed between the negative resistance source and the resonator.  In this example, it is set up to sweep from 6 to 7 GHz with 200 frequency steps.  It automatically sweeps in frequency until it finds suitable conditions for oscillation.  It then increases it’s voltage until no net current is detected going through it.  At this point, the circuit is in steady state oscillation, with the OSCAPROBE supplying no power to the circuit.  The power spectrum at the output is plotted in the graph “OSCPROBE Spectrum”.  It agrees reasonably well with the previous results found in the first section.

This design uses a cavity resonator.  The resonator is constructed in LTCC by making two parallel metal plates for top and bottom surfaces, and a picket fence of vias for the walls.  The resonator is simulated in EMSight, in the EM Structure “Resonator”.  It consists of a square box with a current probe, which is somewhat off center. The distance between the probe and the center of the box can be adjusted to set the resonator's Q, with the probe entering the cavity close to the center, where the H field is minimum means that the coupling is weak. It is possible to adjust the probe position to achieve critical coupling, but this has not done this here. At the resonant frequency, the cavity exhibits a parallel resonance mode.  Please note that the top of the box is set to Approx Open.  (This can be seen at the Dielectric Layers tab/page in “Enclosure”.)  This is what gives the resonator loss and a real part of the impedance at resonance.  There is no other loss mechanism in the circuit; all of the conductors are perfect.  Also, please note that the picket fence of vias has been approximated by a solid rectangle.

The vias were also simulated in EMSight, in “FET Lead Via” and “Connection Via”.  No equivalent model was developed for the vias; rather, the simulated S parameters were used directly.  Notice that the em simulation for the vias was simulated in frequency from DC through six harmonics of the oscillator frequency.  This is important as the oscillator is nonlinear, and it is critical to properly simulate all the necessary harmonics. 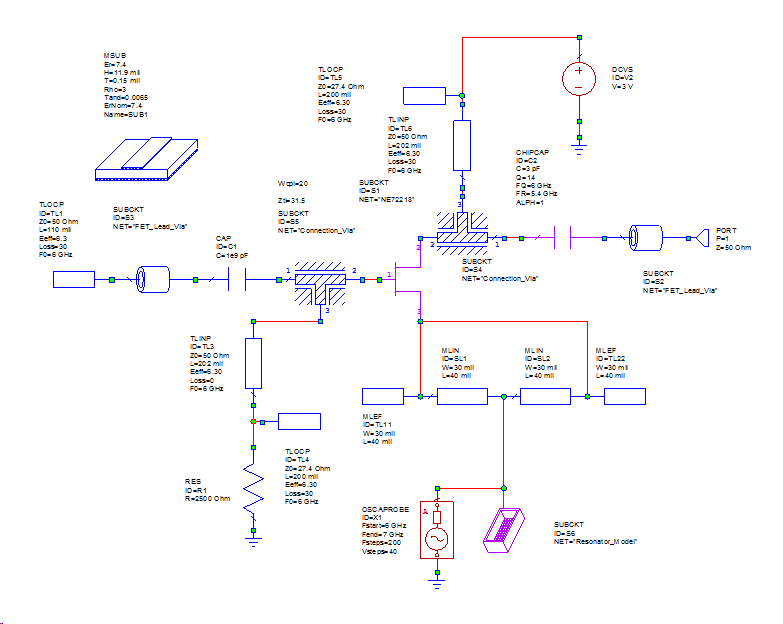 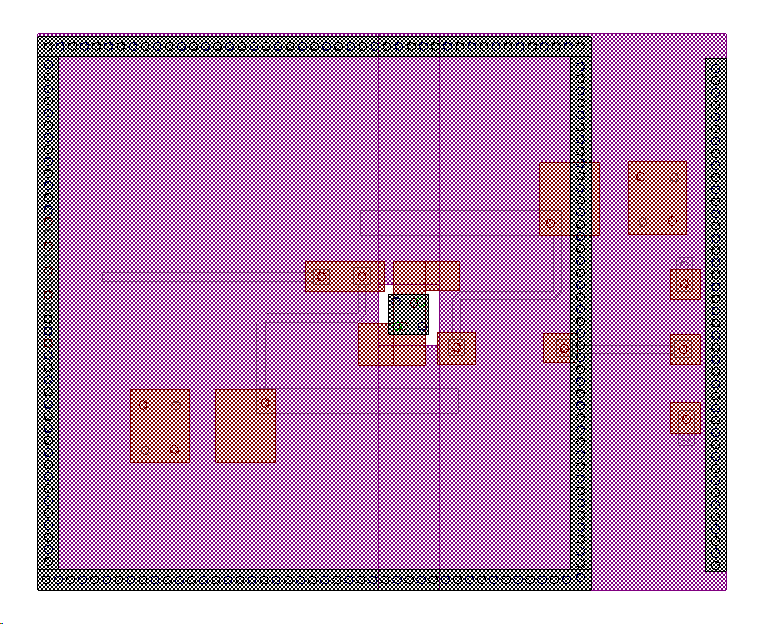 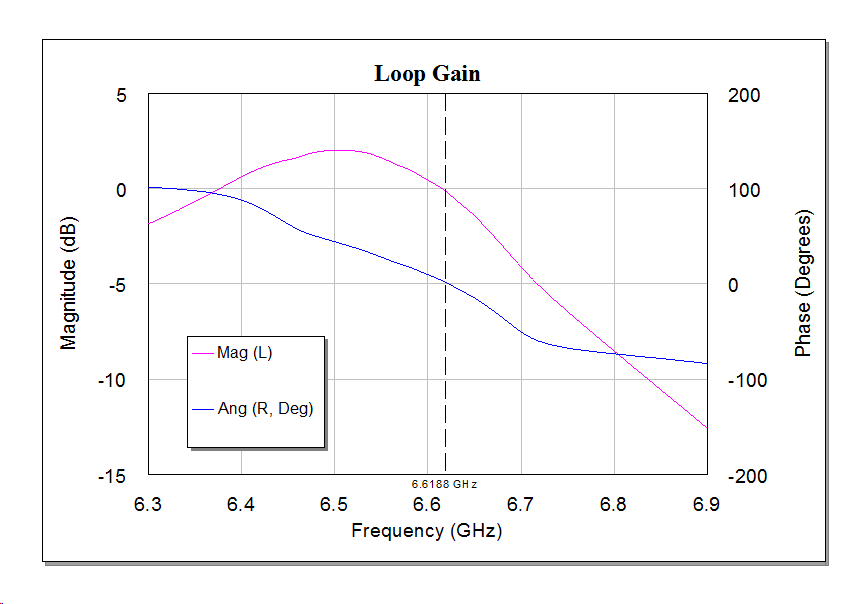 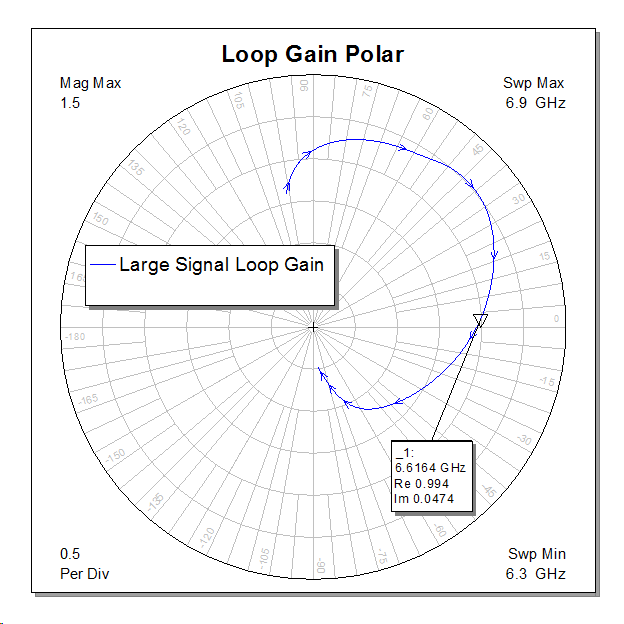 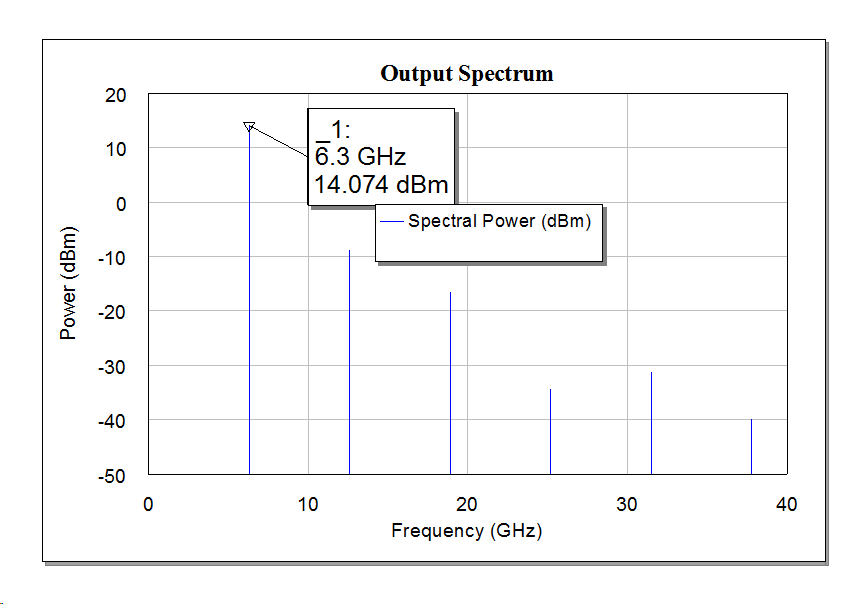