Mixer Noise in MWO and VSS

The use of amplifiers and passive devices in a cascade noise analysis is well documented in the literature and most often leads to simulation results that match measured data quite well. Mixers on the other hand have multiple definitions for noise figure dependent upon whether or not image noise is included. More often than not, noise figure for passive mixers is not specified by the manufacturers. A popular sentiment is that the passive mixer noise figure follows other passive structures: noise figure equals the mixer’s conversion loss value. This is a simplification that should be used with caution.

This article examines the definitions of mixer noise figure using Microwave Office (MWO) harmonic balance analysis on a nonlinear discrete passive mixer. This information is then applied to a VSS mixer model. Development of a VSS model that can accommodate noise mixing in from LO harmonic is then discussed.

Ni is the input noise, which is the familiar formula: kTB, where k is the Boltzmann constant, T is the temperature, and B is the measurement bandwidth. In a 50 Ohm system at the defined temperature of 290 deg K and measured in a 1 Hz bandwidth, Ni  = -174 dBm/Hz.

One way of modelling an active device, such as an amplifier, is to consider the amplifier as noiseless and inject so-called device noise, ND, at the input as shown here:

Shot noise and thermal noise from the amplifier discrete devices contribute to the overall device noise. Output noise is the summation of input noise (kTB) plus device noise multiplied by the gain of the amplifier. The following level diagram is also useful in visualizing the noise figure definition:

Device noise adds to kTB noise at the input and is then amplified to produce output noise. When device noise is present, clearly SNRo is less than SNRi

Now noise factor can be expanded to:

Given that noise figure, and hence noise factor, is specified by the manufacturer, device noise can be determined from:

Thermal noise due to the resistive loss elements contributes to the device noise of the passive component. The difference is that given that the device impedance is matched to the system impedance, the output noise is kTB as shown:

Under the condition of matched impedance, the noise figure of the passive device is the loss value of the device:

Cascade noise analysis uses the noise models described above as shown here for a simple example of an amplifier followed by an attenuator:

This discussion pertains to three port heterodyne mixers where the RF signal at the input port is up or down converted to a non-zero intermediate frequency (IF) by means of the local oscillator (LO) signal. Direct conversion mixers are not considered for this analysis. 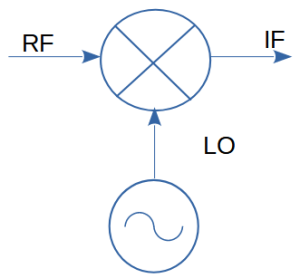 With no band limiting filters at the input of the mixer, noise located one IF on either side of each LO harmonic will convert to the IF signal as demonstrated here:

This phenomenon of multiple noise sources contributing to the overall IF noise sets mixers apart from other active and passive devices depicted above. Not accounting all of these noise sources can lead to low correlation between simulated cascade noise analysis and measured results. 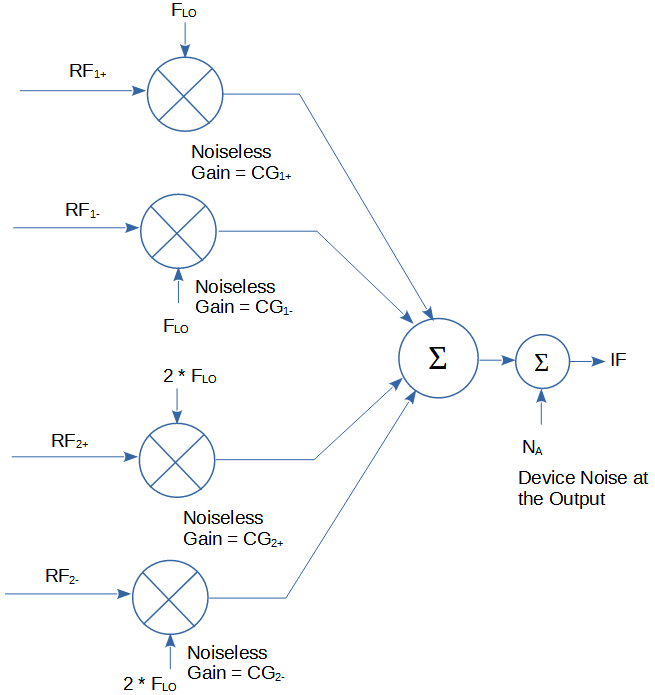 This model breaks the mixer into multiple converters, one for each mixing product on either side of each LO harmonic. This model only shows the first two LO harmonics, but this can and should be extended for all the significant LO harmonics that can convert noise into the final IF. Each converter is considered noiseless with conversion gain unique to the particular LO harmonic. Unlike previous devices, this model adds the device generated noise at the output, NA.

One simplification found in the literature is to only consider the conversion gains of the first LO and to assume CG1+ = CG1-  Then the SSB noise factor can be reduced to:

Another interpretation of the IEEE mixer noise figure definition is that the image noise (unwanted LO sideband) not be included and that only one LO harmonic is used in the calculation. This leads to the following noise factor formula:

This results in a lower noise figure value than the IEEE definition.

Double sideband noise figure is another definition found in the literature. This definition is not suited for heterodyne mixers and is more widely used for defining the noise figure of direct conversion mixers. For completeness, DSB noise figure uses noise from both the primary path and the image path in the denominator of the noise factor calculation:

When considering only the contribution from the first LO harmonic and using the simplifying assumption that CG1+ = CG1- the double sided noise factor equation reduces to:

The harmonic balance (HB) simulator within Microwave Office (MWO) is capable of analyzing noise performance. Noise figure and noise density are among the noise measurements available in HB. The Nonlinear Noise Analysis section in the help file explains the simulation details. One point worth highlighting is that HB noise analysis takes into account noise surrounding each signal harmonic. For the mixer analysis, noise folding in from each LO harmonics onto the IF is automatically accounted for.

Discussed here is an example of a nonlinear circuit model of a passive double-balance diode mixer. An input signal at 3.4 GHz down converts to a desired IF of 0.4 GHz by means of a 3 GHz LO signal as depicted here: 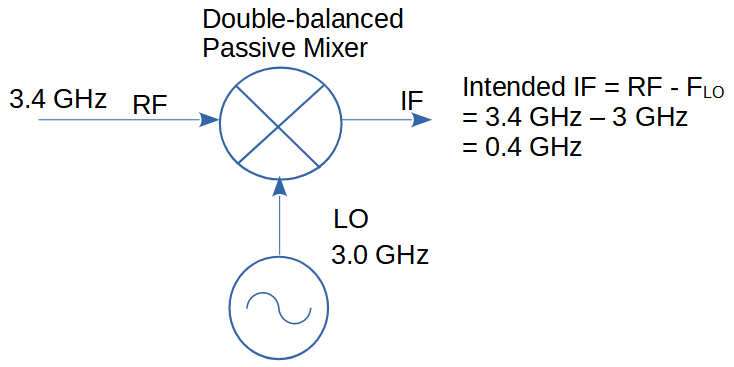 Of course without filtering of any kind, spurious responses will generated other mixing products at the IF.

The mixer itself is comprised of discrete elements as shown here: 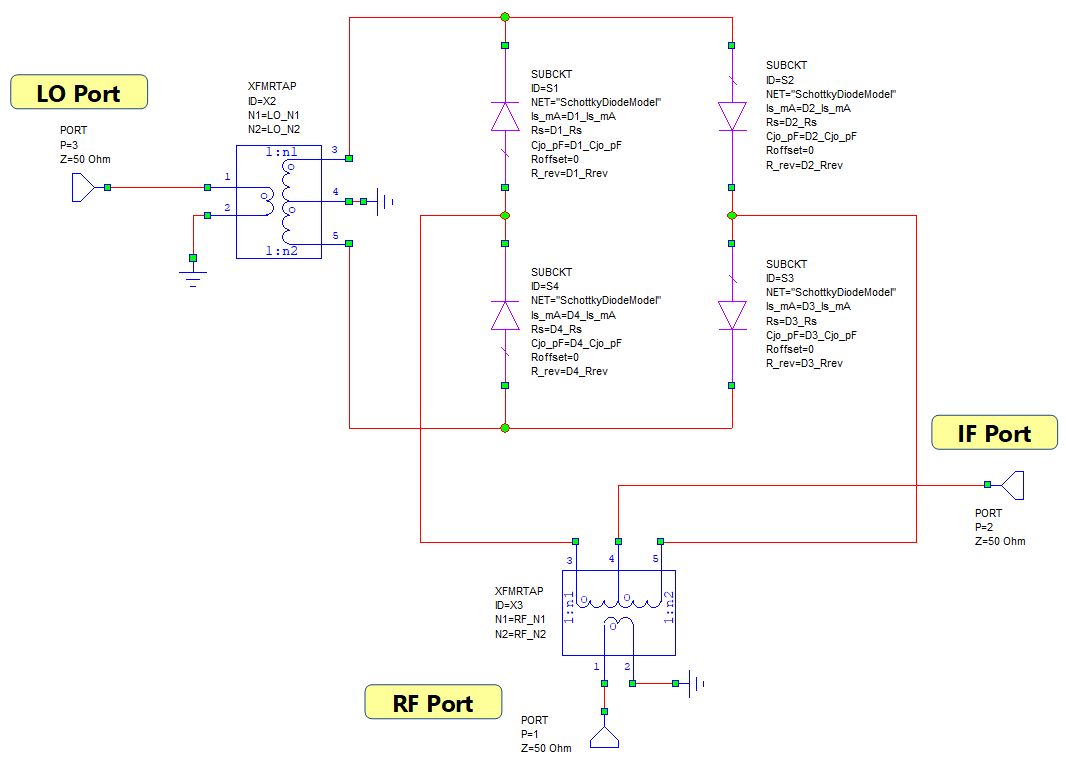 Non idealities can be factored into this mixer model by setting the individual diode parameters to not be the same for all the diodes. The result is an output spectrum rich in spurs. The simulated spectrum for this mixer is shown here: 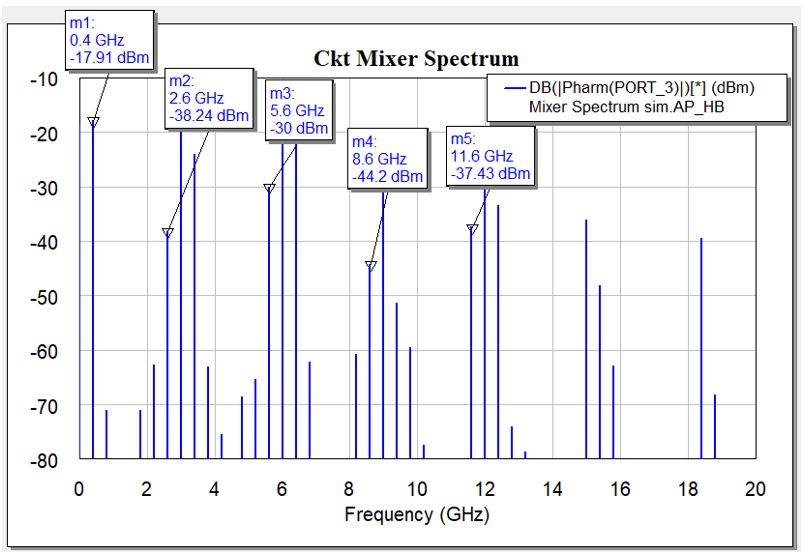 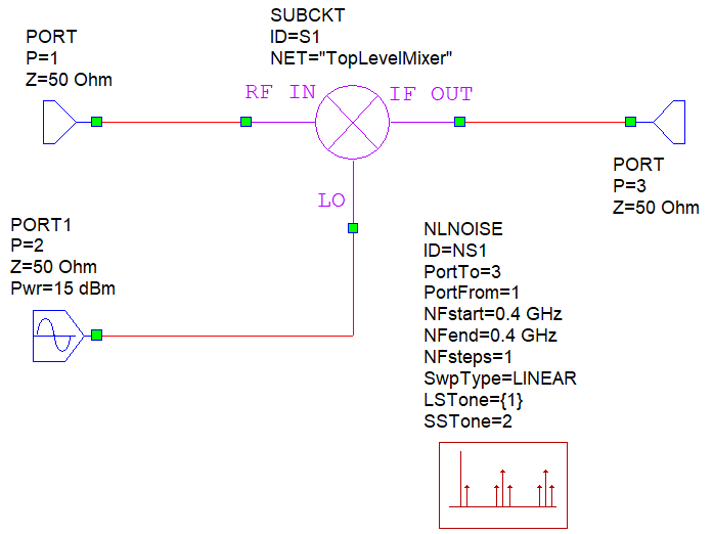 Note that the port source at the RF port is not a nonlinear port, only the LO port is a nonlinear source.

One of the noise measurements available is Noise Spectrum Density (NPo_NL) and using the above simulation circuit, the noise density is only that of the mixer. In other words, the displayed results are the mixer’s device noise: 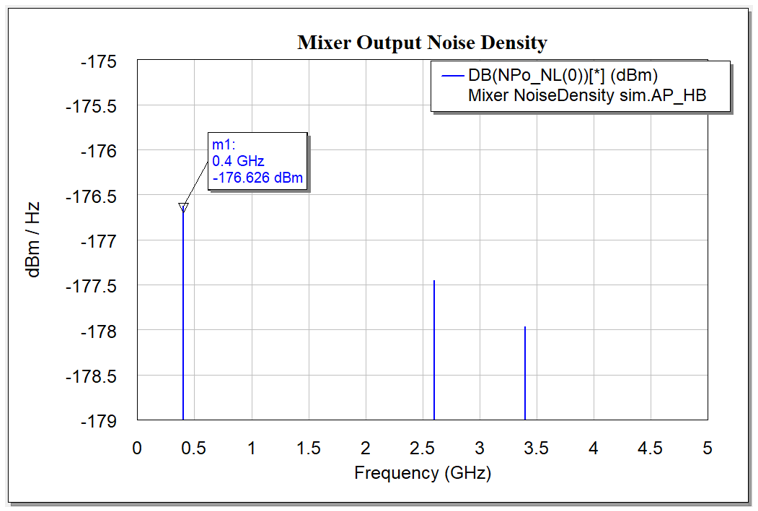 Using the above plots, we can start calculating mixer noise figure. The SSB noise figure calculation is outlined as follows:

Single sideband noise figure can now be computed as shown:

Using the modified interpretation of SSB noise figure, then the calculation becomes: 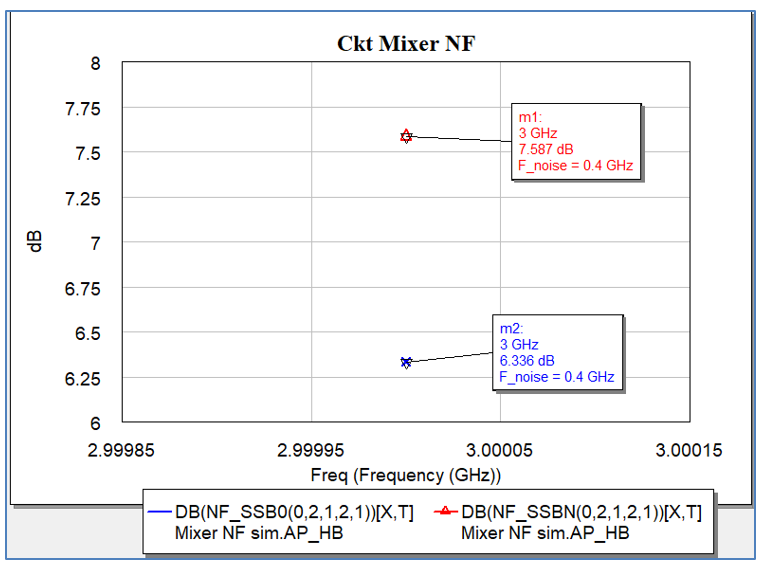 This is the same as the above example except that the LO frequency has been reduced from 3 GHz to 1 GHz. The 3rd LO harmonic is the intentional mixing product which produces the same IF as above, 0.4 GHz.

The noise figure calculations now use the CG3+ , conversion gain of the x3 LO, in the denominator. The simulation results are: 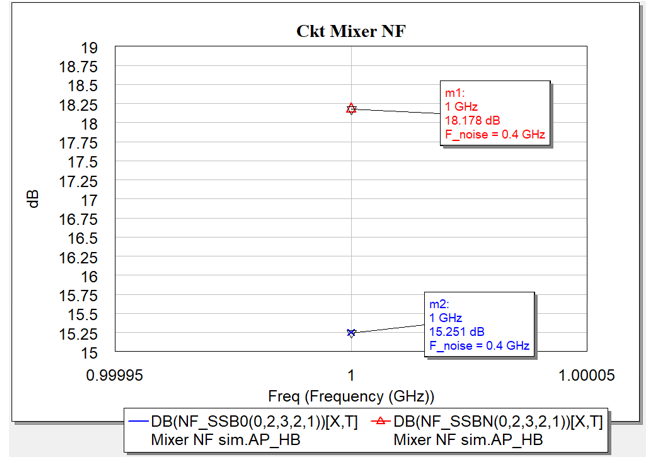 NFSSB = 18.2 dB and modified NFSSB* = 15.3 dB. This shows a larger disparity between the two noise figure calculations than when using the x1 LO harmonic.

Which Noise Figure Definition to Use?

Given that there are two different definitions for single sideband noise figure and that there is a significant difference in their values, the question becomes which one is the right one to use in a cascaded system analysis? To answer this question an example system as shown was constructed:

Various combinations of the block diagram were used: amplifier included or not, fixed attenuator set to different values, filter included or not, mixer using first or third LO harmonic, etc. The filter settings are such that only the intended RF frequency is allowed to pass, thus filtering out noise that would fold in from unintended LO harmonics.

VSS includes behavioral mixer models such as MIXER_B and MIXER_F. Each one has a noise figure parameter and the defined noise figure for these elements is the single sideband noise figure. This places a minimum mixer noise figure value of 10log10(2) or 3.01 dB.

One thing to keep in mind is the limitation of the VSS mixer models in regards to noise. VSS models do not convert noise from the LO harmonic sidebands to the IF as is the case for nonlinear harmonic balance noise measurements in MWO. This can be illustrated using the following diagram:

Excess noise is created at the input of the mixer and only the noise of high side the 3rd LO harmonic is allowed to convert to IF by means of the bandpass filter in front of the mixer. In harmonic balance analysis, the noise at IF exceeds the system noise floor of kTB by a wide margin where as in VSS no excess noise at the IF is present.

Recognize that the VSS mixer models do possess a means of selecting different LO harmonics by means of the LOMULT parameter. 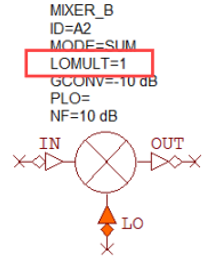 However, this parameter is only used in identifying the output signal frequency. It does not suggest that this model converts noise from all of the LO harmonic to the IF. The following diagram illustrates this point:

Suppose that LOMULT is set to 3 so that the identified IF frequency is a result of the RF mixing with the 3rd LO harmonic. Only noise one IF on either side of the 3rd LO Harmonic will convert to IF. Noise associated with the 1st and 2nd LOs does not mix down to IF. The consequence: VSS cascaded noise does not match measured data nor harmonic balance simulation results when using VSS mixer models unassisted.

There is a mitigation technique that can allow VSS mixer models to be able to model noise mixing to IF from multiple LO harmonics. The idea is outlined in the following high level block diagram: 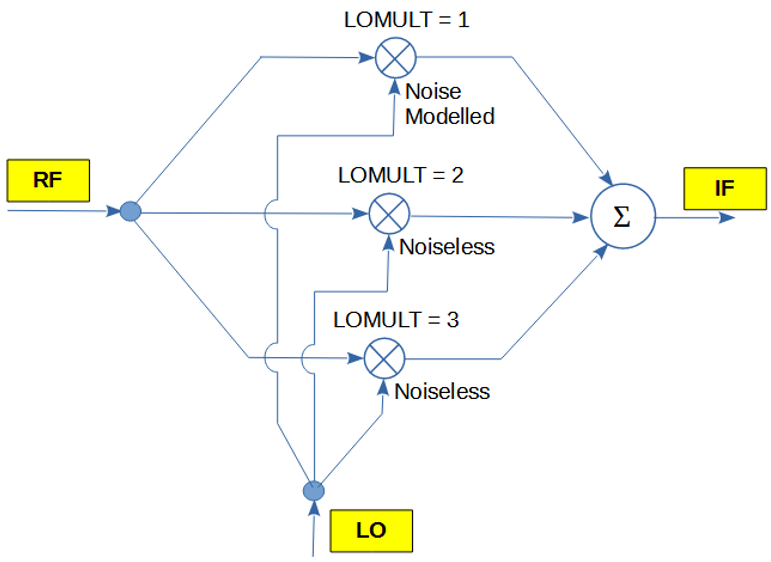 The idea is to split the VSS mixer into multiple paths, one path for each LO harmonic. At the end of this chain, all paths are combined. This can all be contained within a subcircuit so that at the top level it can be easily substituted for existing VSS mixer elements. Note that only the LOMULT=1 path mixer contains noise. This path is responsible for generating the overall mixer’s device noise. However, input noise will still be converted by each mixer and summed together at the output.

Here is a demonstration that proves that proper noise modelling is taking place. Shown here is a test system diagram where 20 dB excess noise is generated at the mixer input 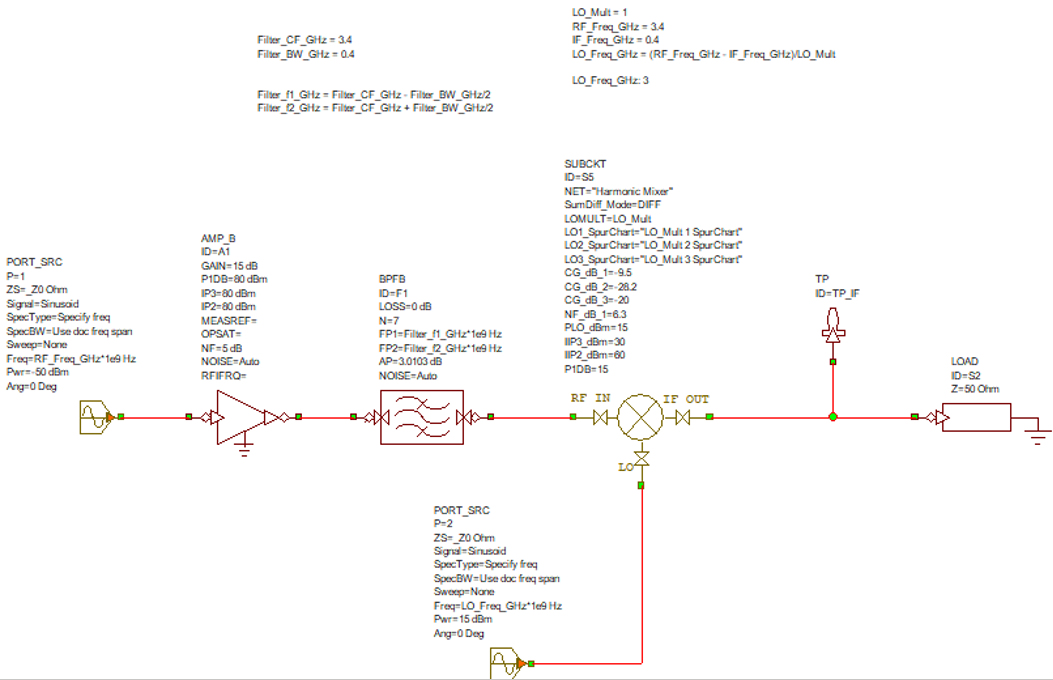 Using a mixer with SSB noise figure of 7.4 dB and the following conversion gains:

Without the filter in place, noise from all LO harmonics will convert to IF. Output noise is found from: 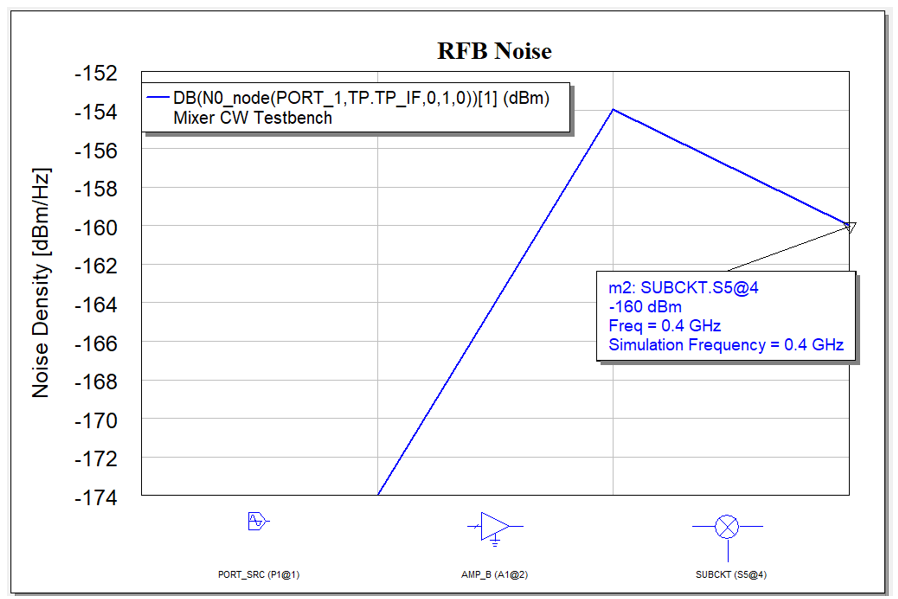 Accounting for mixer noise due to noise converting to IF from all of the significant LO harmonics should not be overlooked. Nonlinear simulations in Microwave Office does accurately calculate this noise phenomenon. In VSS, the native mixer elements only account for noise associated with the selected LO harmonic. A mixer model comprised of existing VSS elements can be constructed in VSS.