Calculating the total power when combining two or more CW signals is often associated with the analysis of a balanced amplifier as shown here:

In this example the two amplifiers have equal gains of 10 dB. Assuming that the input splitter and output combiner are lossless and with an input signal with 0 dBm power, the output power is +10 dBm (See the blue annotations in the system diagram).

A dilemma occurs when the amplifiers have different gains. Shown here,  the lower amplifier has a gain of -100 dB:

The resulting power at the output shows a 6 dB drop in power when compared to the situation where the amplifier gains are equal. Intuition states that there should only be a 3 dB drop in power. This intuition comes from the thinking that two equal power signals when combined have a total combined power that is twice as high (or 3.01 dB) as the power of one of the signals.

First, a review of average power calculation single tone and multi-tone signals. For a single tone signal, consider a time domain voltage signal, v(t), placed across a resistor, R. The instantaneous power dissipated in the resistor is defined as(1):

For a sinusoidal voltage signal, the average power is defined as:

where T is the duration of one period of the sinusoidal signal. However, for more complicated signals, such as adding two sinusoids at different frequencies, the more general calculation for average power must be used(1):

Here is a worked example of a single sinusoidal signal:

Using the computer to perform this calculation gives the same results: 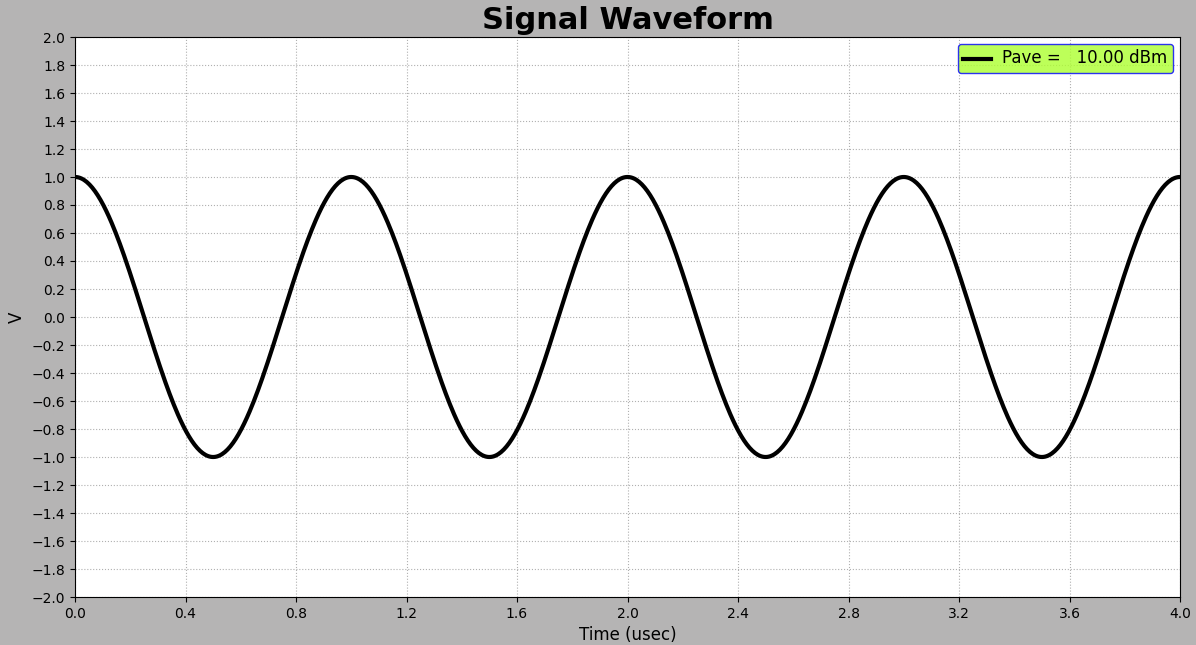 The average power, Pave, shown in the green legend is a computed value using numerical integration on the displayed waveform. 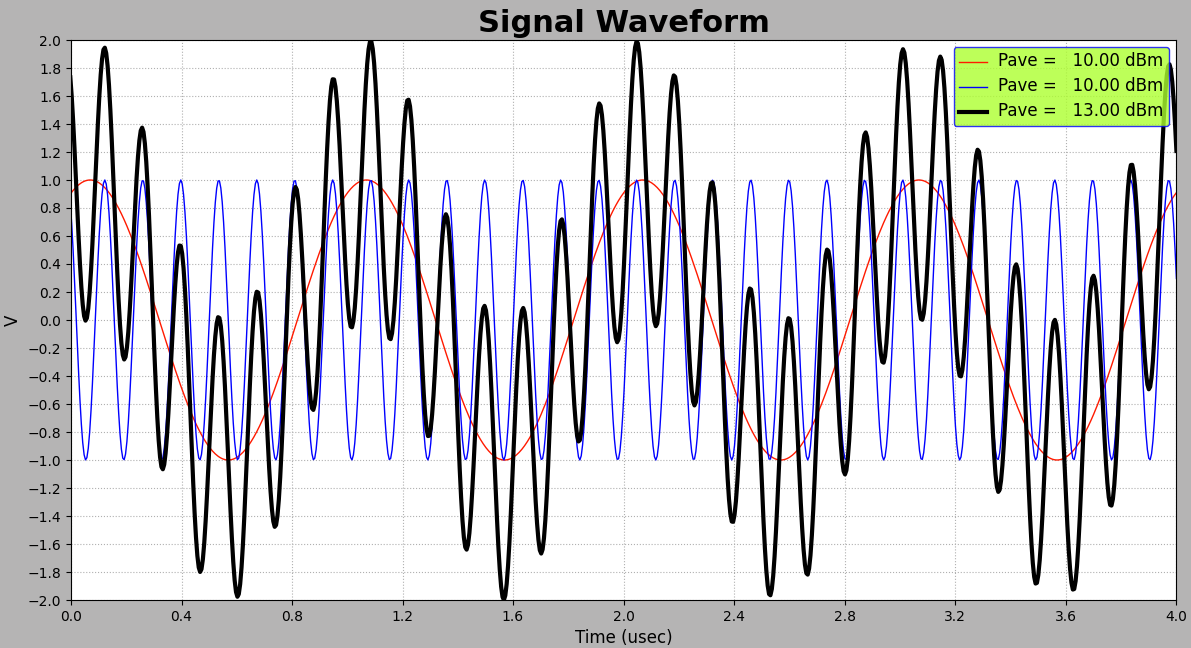 A chart of uncorrelated signal addition of signals is shown here: 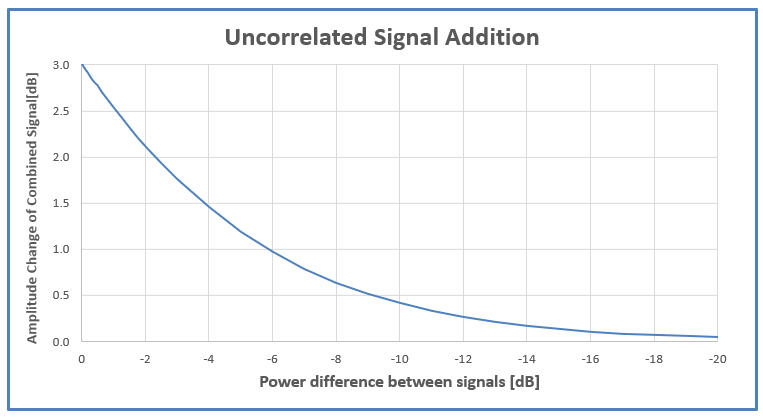 Here is a worked example of combining two unequal amplitude signals when the frequencies of the signals are not the same. Consider one signal with a power level of 0 dBm and the other signal that has a power of -10 dBm, the combined signal power calculation is:

Signals at the Same Frequency

Add the voltages of individual signals and then compute the average power. Peak voltage is computed from

Using the computer simulation of this example results in the same combined signal average power: 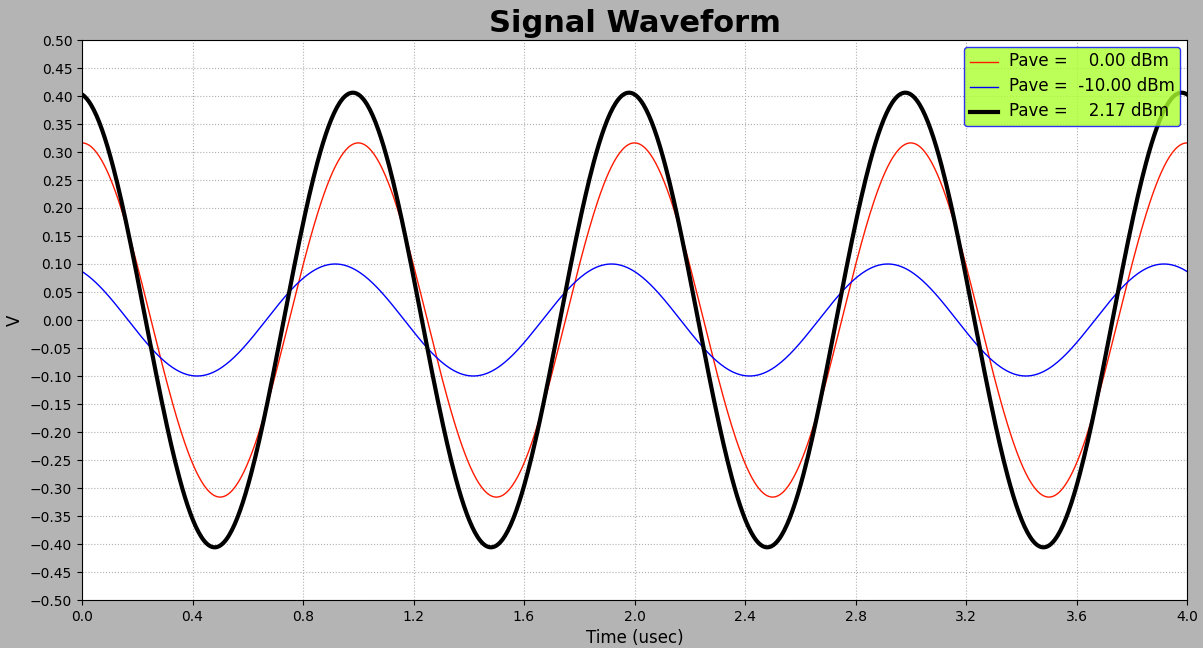 Here are two charts showing the addition of two signals that are at the same frequency:

From the charts, if the two input signals are at the same frequency with equal amplitudes and phases, then the combined output power is 6.02 dB above the power of each individual signal. The computer simulations confirm this result:

In this example, two 0 dBm signals at the same frequency and phase are combined. The two powers add to be 6.02 dBm followed by the -3.01 dB gain of the combiner, the resulting combiner output power is 3.01 dBm: 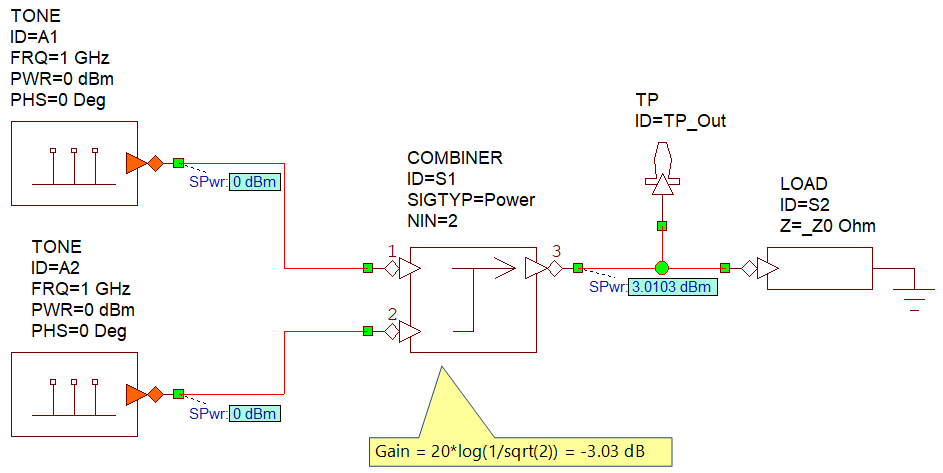 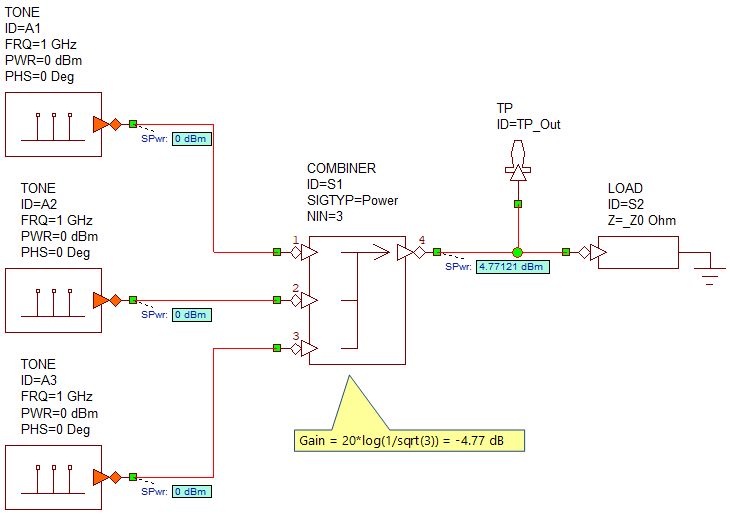 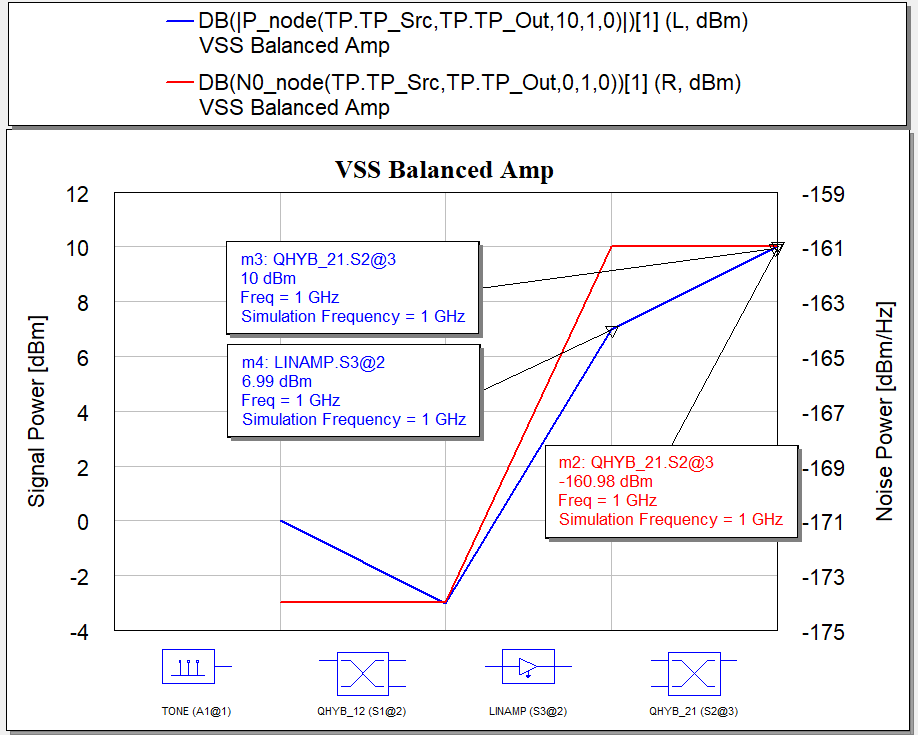 Following the signal power through the chain, the signal power at the outputs of the two amplifiers is +7 dBm. Since these signal combine in-phase and they are at the same frequency and power, the signals add 6 dB (coherent power addition) and with a -3 dB gain of the output combiner the final output power is: