Time domain simulation in a VSS system where noise from multiple sources is being combined can lead to an offset in the combined noise power density value. This phenomenon is described in the VSS Modelling Guide that is part of the help file:

Before analyzing a more realistic power combined amplifier system, it is illustrative to show noise simulation results on the following system that does not include the amplifiers in the two branches:

This system without amplifiers is a conceptual model for illustrating how noise propagates through a system that contains ideal power splitters and power combiners. In this simplified system without any active devices that would generate noise, the noise at the output of the ideal lossless combiner would be the same as the noise at the input of the lossless splitter as shown. If the input noise power density is kTB (-174 dBm/Hz), then the output noise power density will be kTB as well. This makes intuitive sense in that a system with no active devices to generate additional noise and with lossless splitter/combiner, noise power must be conserved, so the output noise power has to equal the input noise power. However, the VSS simulation results shown below demonstrates that there is an unexpected offset in the noise floor: 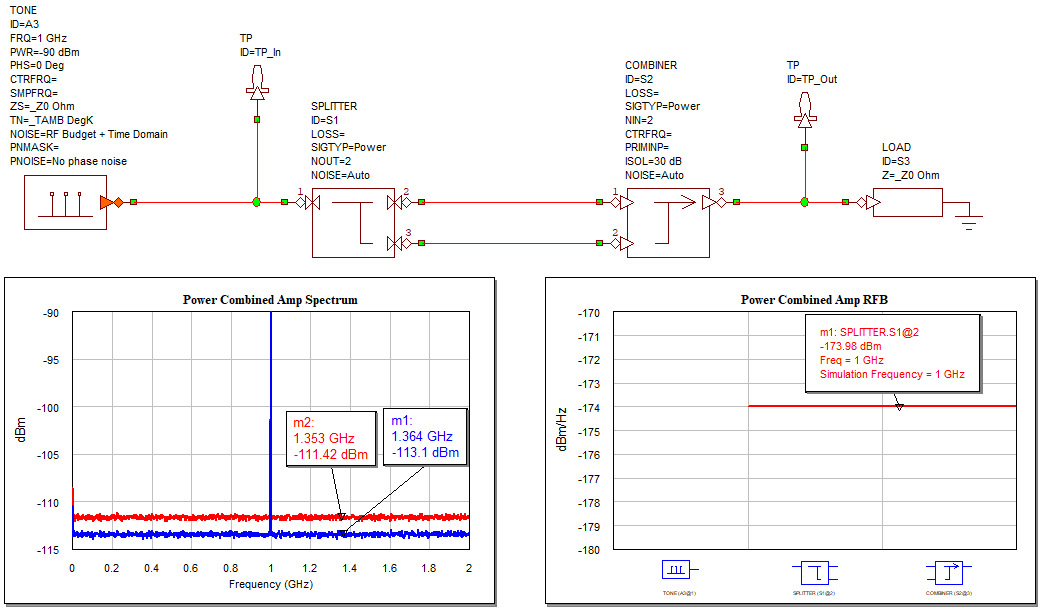 The left plot shows the time domain simulation power spectrum measurement with the blue trace being the noise at the input and the red trace being the noise at the output. These measurements are made with a resolution bandwidth of 1 MHz so the markers are 60 dB higher than the 1 Hz BW values. The time domain measurement shows that the output noise is higher than the expected result. In an actual system, the input and output noise floors should be the same.

The time domain noise offset also applies to a balanced amplifier design where the input splitter and output combiner are quadrature hybrids as shown here: 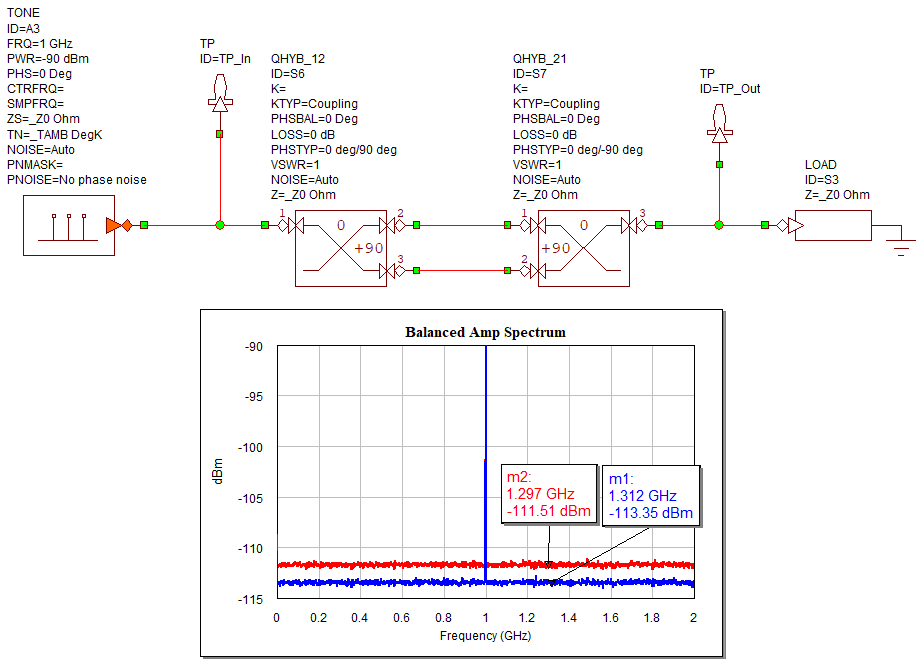 All of the following examples that use a Wilkinson style splitter/combiner also apply to systems that use quadrature hybrids.

Noise Combination in a Passive System

The following conceptual system helps illustrate the sources of the noise power offset in the simplified system consisting of only an ideal power splitter and an ideal power combiner:

Wilkinson two-way splitters use a 100-Ohm resistor and this resistor generates noise power at each of the two splitter output ports. The noise due to this source, labelled Nsplitter in the diagram, turns out to also be approximately -177 dBm/Hz at each output. The Nsplitter noise at each output is correlated with each other since both originate from the same 100-Ohm resistor. However at any instant in time, the phases of the noise signal components at the two separate outputs are 180 degrees apart.

In the combiner, the gain from either input to the output is also 3.01 dB. The input noise signals in both branches combine in a coherent fashion, that is the combined noise power is 6 dB above the noise power at each of the branches. For more information on combining coherent and non-coherent signals, please refer to this link. The combiner gain then reduces the output power by 3.01 dB. So the noise at the output due to the input noise is approximately -174 dBm/Hz. The Nsplitter noise being 180 degrees out of phase relative to each other cancel in the output combiner. The output noise then is -174 dBm/Hz, which is the same power density as the input noise level.

Noise in a System with Active Devices

Amplifier A represents adding noise above kTB that is common to both branches, thus correlated noise. Amplifiers B add uncorrelated noise in the two branches due to the amplifiers being independent of each other. When input noise exceeds the splitter generated noise by a sufficient amount, then the effect of the splitter noise on overall total output noise diminishes. Shown here is a chart showing the VSS time domain noise power error as a function of input noise above kTB: 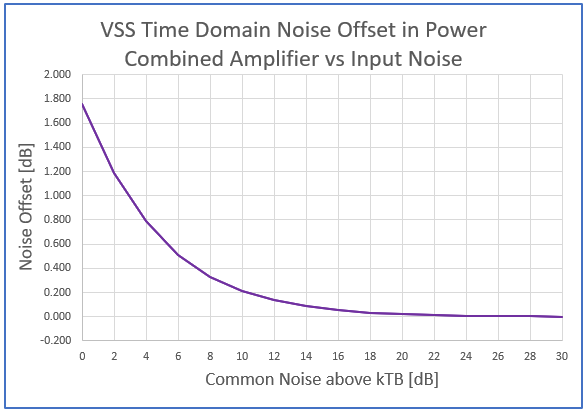 Similarly when the independent noise resulting from noise figure of the two amplifiers, B, in the above system increases, the VSS time domain noise power offset decreases. Shown here is a chart showing output noise offset as a function of the noise figure of each branch amplifier: 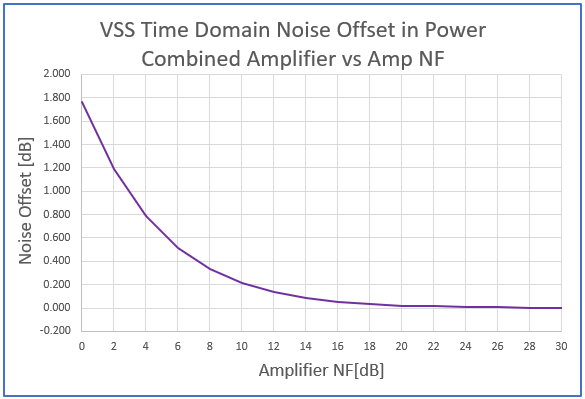 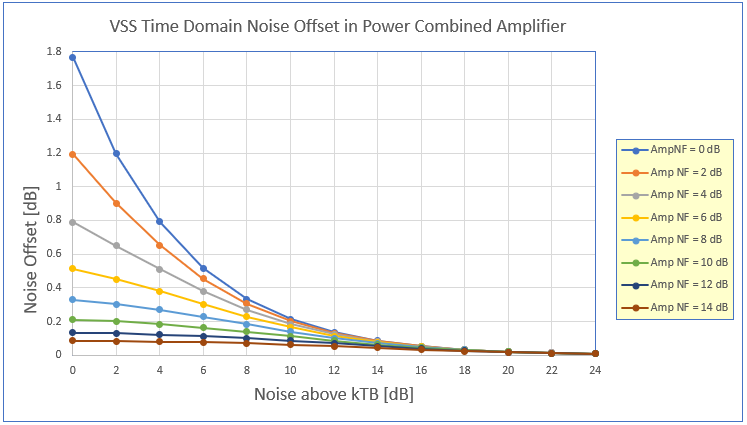 Another mitigation technique is to set the splitter to being noiseless as shown here: 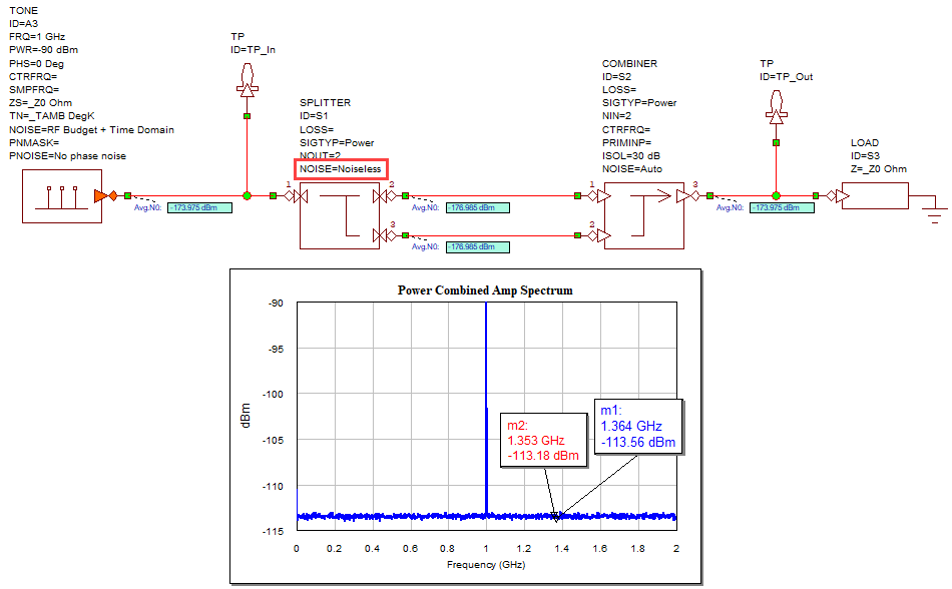 The results show that the output noise matches the input noise for this passive system when the splitter is made Noiseless. Use this mitigation technique with caution.

Caution is warranted in the use of the NOISEPSD annotation in system diagrams where multiple noise sources are being combined. The noise annotation at the output shows a noise density value of -159 dBm/Hz where as in the graph, then noise density is -162 dBm/Hz (spectrum is using a 1 MHz RBW value). The annotation shows a 3 dB offset. 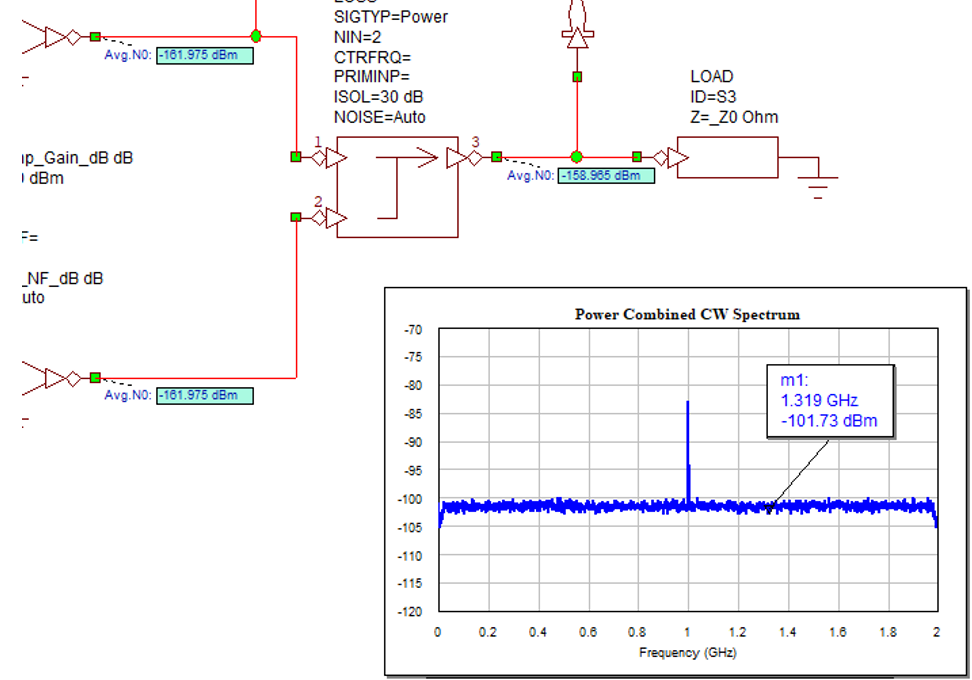 Annotation noise value is a value that is an estimate of the system noise calculated before a simulation begins. This annotation is primarily used for internal calculations and is not intended to be a substitute for time domain simulated results. Please do not rely on the noise annotation value after multiple noise sources have been combined.