Scripting How-To: What is the AWR Design Environment API and how can I use it

The easiest way to get started is to use the script editor built right into the AWR Design Environment. Figure 1 shows the the location of the toolbar button which opens the built-in scripting environment. 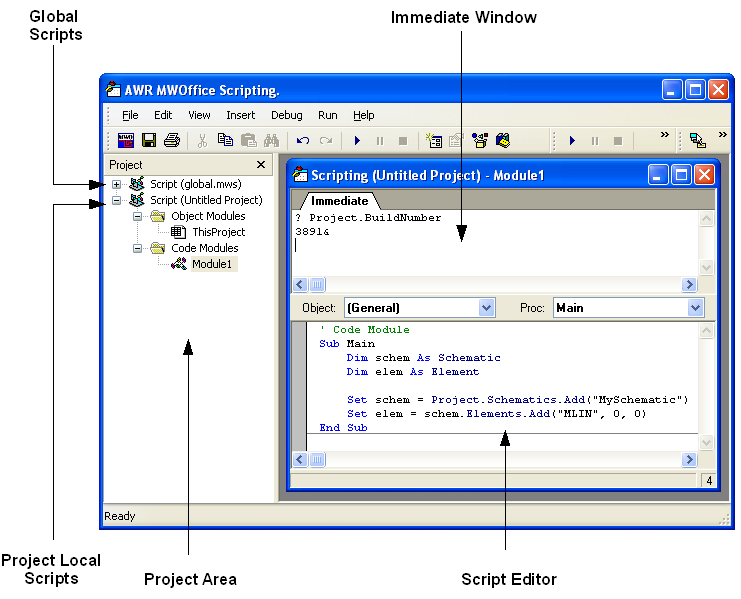 Within the Script Editor window there are two main sections, the project area which shows a tree view of both global and project local scripts and script editing area where scripts can be entered and edited.

The project tree is broken into two separate tree's at the root:

To add a script right-click on either Script(global.mws) or Script(<project name>) and from the context menu select "Insert Module". This will create a new script module in the tree you clicked on and bring up a script window in the script area.

Once you have a script window you can begin by writing code between the Sub Main and End Sub statements in the script window.

The Immediate window (upper half pane) can be used to evaluate expressions interactively. Start by typing a question mark '?' followed by a valid expression and press enter to see the result. In Figure 2, I've entered the following expression:

and the response is

Indicating that the project was created with build number 3891 of the AWR Design Environment.

To get you started try the following short script which creates a schematic and adds a MLIN element to it.

To run this script press the run button on the tool bar which looks like the play button on a VCR or tape recorder.