I have measurement equipment that does not have the ability to sweep certain variables (such as frequency or bias) while performing load pull so I perform individual load pulls and manually sweep the variables of interest.  I would like to use the AWR Design Environments load pull visualization and measurement capability to analyze the performance of my device over these variables.  How do I go about that?

The project illustrates a combined load pull file from four separate load pull files where frequency and bias were manually swept.  These files are combined into a single load pull file and the resulting file is then compared to the original files to ensure that is was combined properly.

If the load pull file is not in AWR A/B wave format, we do have a utility to Import Load Pull Files which does convert some types of non-AWR file formats to AWR formats.  If the file type is not in the supported conversion list and is imported directly, please contact your load pull equipment vendor to ask them about directly supporting AWR Load Pull formatted load pull files.

The Combine Load Pull Files script uses a control file to specify the data files to be combined and their corresponding independent variable values. 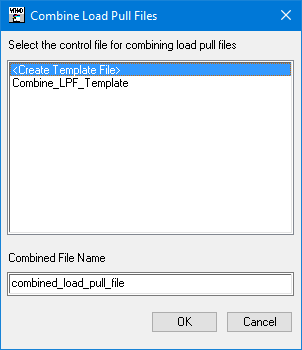 Users can create a control file template by running the script and choosing <Create Template File> from the list of choices. The template shows the control file format and gives instruction on how to specify the variables and the data files to be combined.