A coaxial probe-fed rectangular microstrip patch antenna on a finite dielectric substrate and a finite ground plane is modeled. Perfectly Matched Layer (PML) boundary conditions are used on the 3D enclosure except for a circular region through which the coax line feeds the antenna. Principal plane radiation patterns at Phi equals 0 and 90 degrees are plotted at 7.8 GHz along with the feed return loss and input impedance.

- Wave ports can be defined on the face of 3D subcircuit that extends outside of the enclosure space of the parent EM structure.

This example also demonstrates how the finite dielectric substrate is setup in the 2.5D layout editor in the AWR Design Enviroment. This is done by mapping the drawing layer "+LAY_3_SubFinite_COND" with a dielectric material "SubFinite". It should also be noted that the finite ground is drawn with a circular hole. Move the "Coaxial_Feed" in 2D layout view to see the hole. Without this hole, the Coax feed would be short circuited.

In the "ExtendedCoax" EM structure the wave port solution includes only the cross-section of the coax line with its TEM mode. Since the lower boundary of the 3D structure is a PML the radiating fields fringe around the bottom face resulting in a significant back lobe in the radiation pattern graph.

The "ExtendedCoax" setup is therefore a better real-world arrangement, whereas the "TouchingBoundary" document shows the behavior of the Analyst wave port solution.

The total power far field radiation pattern measurement is found under Electromagnetic > Antenna > Sweep Theta > PPC_TPwr. Phi=0 gives the XZ plane cut, and Phi=90 gives the YZ plane cut. The graphs show the directivity patterns as none of the two options for including losses is checked. 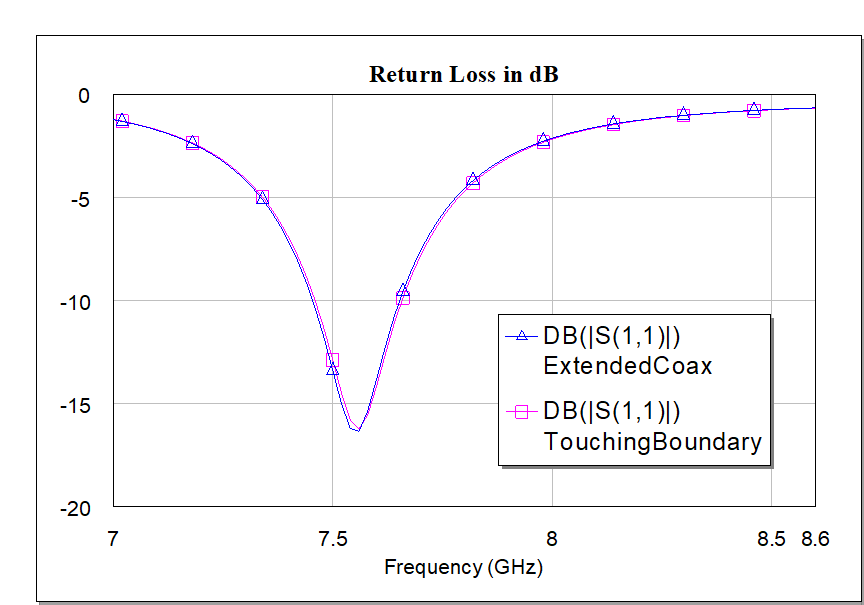