Where To Find This Script

You can run this script by clicking on Scripts->Layout->

This script utility will prompt the user to select a GDSII library from existing libraries loaded in the current project and a filename to write the results:

The script utility will collect up the information and then open a new text file in the AWRDE with the results. By default it will display the cell names in the project as shown below. 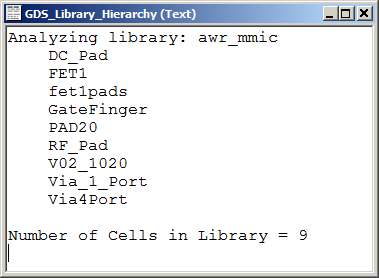 The additional option Dump out information about the instances also? will show any cell instances (hierarchy) used in this cell. For example, if this same library is run with this same options, the results display as shown below. 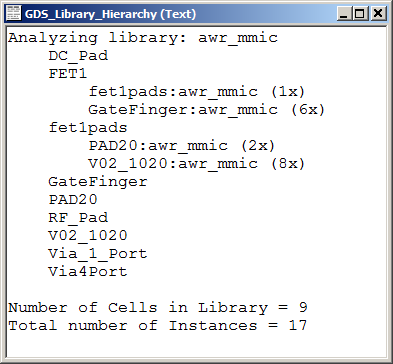 Notice the name of the text file in the library is the same name as entered in the dialog. If this file exists when the script is run, the contents will be replaced with the new data. You should export the file or rename if you want to keep a history from the script being run.

Scripts included in the install are configured to run directly from the NI AWR Design Environment from the Scripts menu.

Scripts that you download must be imported into a project or placed in your global scripts folder to use them. See Working with VB Scripts for information on how to use these scripts.

You can also customize the AWRDE to run scripts from hotkeys, menus, or toolbar buttons. See Working with VB Scripts for more information.

For complete information about the AWRDE API, see the AWRDE API Programming Guide Help in the AWRDE installation. You can also view our Scripting Website for more scripting examples.