The AWRDE API Scripting Guide is written using SAX Basic which is compatible with the Visual Basic for Applications (VBA) syntax and coding style. For Python programming, the scripting guide will still serve as the API reference and for the most part the AWR specific command syntax will still apply. This document shows how to interpret the AWRDE API Scripting Guide for Python coding.

This document assumes that pyawr library has been installed and that you are using a Python IDE that supports code-completion. Please refer to the AWR Scripting in Python document for pyawr installation instructions.

The syntax for importing pyawr  is shown here:

First import pyawr.mwoffice into the Python code and give it the alias, mwo.

Assign pyawr.mwoffice.CMWOffice() class to object variable. Object variable awrde will be used in these examples.

There are three different ways to link to AWRDE

If multiple versions of AWRDE are installed on the computer, use the version option as shown:

In Python, the object variable must precede the Project collection object. So, the same command in Python would be:

In this Python example the Schematic 1 is being assigned to the s collection object variable:

The AWRDE API is strongly written around the VBA compatible SAX Basic collection of objects style of coding. Python will still use these objects, however there are some Python syntax conventions that take precedence. The list of objects can be found in the AWRDE API Scripting Guide > AWR Design Design Component API > Objects List

VBA uses the For Each looping structure and most examples in the AWRDE API Scripting Guide are written using this construct. Here is an example from the API document for looping through all the schematics in the project and printing their names:

In Python the same functionality can be written in two different ways:

In SAX Basic, and extensively in the API Scripting Guide, the Set command is used to assign a collection object to a variable:

In Python, the syntax is as shown

Here are examples using both styles for printing the names of all the schematics in the project:

The square bracket indexing styling allows lists to be created with constructs that comply with Python methods of accessing elements within a list or array. For instance, using an index of [-1] references the last schematic in the project

Lists can be created from collection of objects using standard range constructs as shown here:

This indicates that the data file type is a Touchstone File

Here is an example of adding a new data file using the enumeration for setting the data file type to 'text'.

The following example shows some basic operations using pyawr to interface with AWRDE. Included are updating global frequencies, updating schematic equation, updating schematic element value, simulating the project, reading graph data, and plotting the data.  This example assumes that AWRDE is running and is open to a project labelled pyawr_PlotMeasurementData.emp. This project includes a simple filter structure with S-parameters as the graphed data. Variable C1 will be updated in the example code. 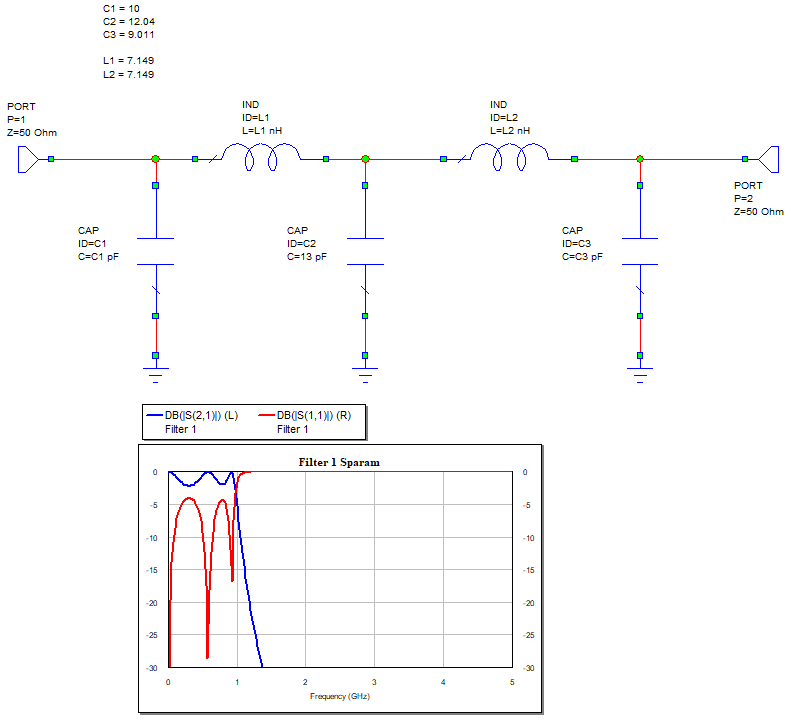 This first section imports pyawr, matplotlib and numpy. Then awrde object is created. Next, the active project name is read and the project name read back is compared against the desired project name.

This section shows how to update an equation located in a schematic as well as updating an element parameter.

In this final section, the project is simulated,  measurement data is read from a graph, and then matplotlib is used to plot the data.