Connecting to correct AWRDE instance from an external program

AWRDE supports API access through the COM automation API. While AWRDE is typically controlled via the Sax VB scripting engine incorporated into the design environment, it is sometimes desirable to control the environment from external programs created in a variety of languages.

One of the problems of using external programs is having the program connect to the desired instance of AWRDE when multiple instances are running. This application note describes a mechanism for handling this problem.

This is an example how to write a compiled application (VB.NET in this example), run that app from MWO, and have the app connect to and control MWO.

Let's start by running an example that actually solves the problem to get an understand of how this solution works in practice. Do this by: 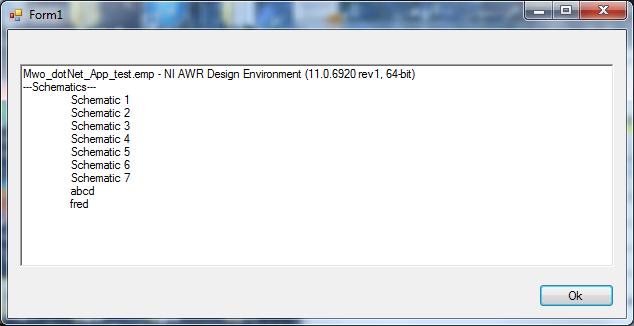 This window is created by My_Mwo_vb_app.exe , which is in the same folder as the project file. This program was launched by MWO and then connected to MWO via the API and iterated through the schematic in the project, writing them to the dialog.

You can see we're using the Shell() function to run the .exe. We also pass a command line argument, which is the Instance Class ID (MWO.InstanceCLSID). The debug window shows what this looks like:

The value in the curly brackets { } will be different each time you start a new instance of MWO. This value is used by the external exe to connect to the COM interface of this specific instance of MWO.exe.

Let's open the VB.NET app to see how this works.

The project has a single form, "Form1". Bring up the code window for the form:

In the function Form1_Load(), we call the function Get_IMWO_Interface(). This function is in the file Connect_To_MWO.vb , which you can copy in to any new vb apps (or refer to it from a common location.)

This function parses the command line arguments, gets the Instance CLSID, and uses it to query the OS for an IMWO interface. This interface is the same one you can get from the SAX VB scripting environment by typing "MWO" or "Project.Application".

If the function could not connect to the MWO CLSID from the command line (eg, no command line was passed), it will return Nothing . In that case it will ask the user if he wants to start a new instance or MWO (actually it will start a new instance if none exists, or connect to an existing instance.) The function Create_New_MWO_Instance() is also in Connect_To_MWO.vb .

After we have an IMWO instance, we can use it to get the Project, and from there get Schematics, Graphs, and anything else in the component API. In this example we use it to print the main window caption, and list the schematics from the project.

If you are writing the app to be part of a process library, you can add it to the PDK scripts folder. Then when launching the app from a script, you can use