One of the advantages of Python scripting with the AWR Design Environment (AWRDE) is the flexibility in graphing that is available with Python. Different viewpoints of the same data can be a big benefit in solving engineering problems. Presenting data in highly customizable graphs is a further advantage of extracting data from AWRDE and plotting the results in Python.

Some of the graphing capabilities that Python can offer are:

Another area that may be of interest is to read trace data from AWRDE into Python then perform some post processing of the trace data such as filtering, smoothing, etc. and then export the results back into AWRDE. Whether plotting data in Python or performing some sort of data processing in Python, importing and exporting data between AWRDE and Python is involved. This article explains some of the graphing related techniques using Python with AWRDE including:

This article assumes that Python, a Python IDE and the pyawr module have been installed. See AWR Scripting in Python: Getting Started and Installation for installation instructions. Additionally a Python plotting module will need to be installed. This article uses the popular Matplotlib module. Please refer to https://matplotlib.org/ for instructions on installing Matplotlib as well as detailed tutorials, API syntax, and plotting examples.

At the beginning of the Python script, the appropriate modules must be installed. The following examples use numpy, matplotlib and pyawr:

Next a link between Python and AWRDE must be established:

The project variable is a convenience item. More information on linking Python to AWRDE can be found in AWR Scripting in Python: Using the AWRDE API Scripting Guide.

The coding examples in this article use the AWRDE installed project LPF_Lumped.emp.

Matplotlib is an open-source Python module that is highly configurable and can be used to present data in almost any type of graph imaginable. Higher level plotting functions are available in the submodule pyplot and this is what will be used for the following examples. For even more advanced graphics programming, other submodules are available within the umbrella of the matplotlib module. The intent of this article is to mostly show the AWRDE graphing API commands, not to cover matplotib programming, please refer to the above matplotlib link for matplotlib commands beyond what is introduced here.

Before showing the AWRDE graph API commands, a couple of very basic matplotib plotting examples will be shown. Later on data originating from AWRDE will be used in these types of graphs. For the simplest of graphs, only two matplotlib lines of code are required: one to plot the data and the other to display the graph window.  In the following example, x and y vectors are created for a sine wave:

This code produces this graph: 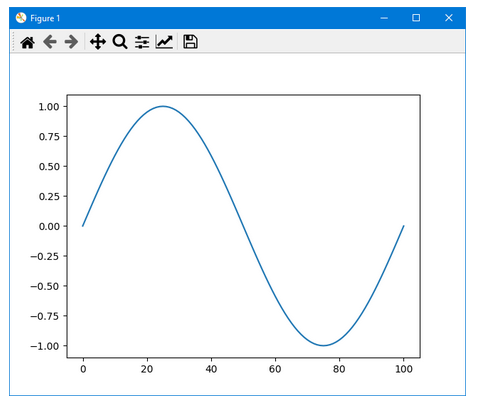 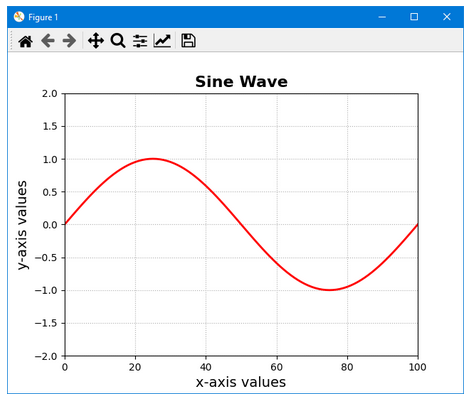 The collection variable Graphs contains of all the graphs in the project. The following code shows how to loop through each graph in the project and print the name of the graph and its type

From above, the variable project is equal to awrde.Project

This code produces this result from the installed example LPF_Lumped.emp 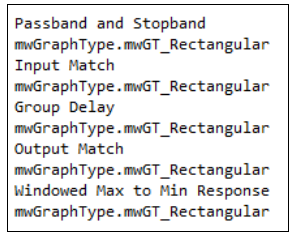 Shown here are a few examples of editing graph properties

These commands add a Smith chart to the LPF_Lumped.emp example project

Measurements collection contains all the measurements within a single graph. This code demonstrate returning the number of measurements  in a graph, then for each measurement return: measurement name, source document and enabled state

Scalar data is single Y data point such as magnitude, phase, real, etc. An example of of multiple Y data points would be complex data (for example from a Smith chart). The first method is to read the entire measurement into an array at once. The meas.TraceValues() method takes a single value of 1 as the pass parameter for data that does not include swept variables. This function returns an array of tuples with each data point an (x ,y) tuple. The numpy function asarray() can convert this array into a standard array

The second method is to read individual data points. For instance only select data points may want to be read instead of the entire measurement array.

The XValue() and YValue() methods are indexed beginning at a value of 1. The resulting graph looks like: 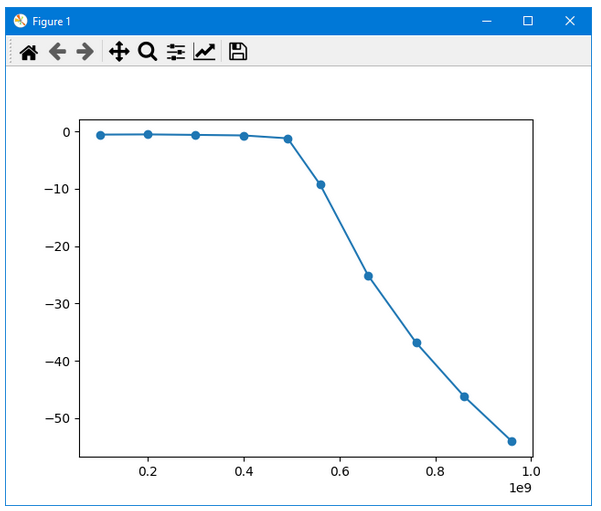 For y-axis data that may contain two values, for example complex data, the measurement read process is similar to that of scalar data. For the trace array read (Method 1) , the tuple contains three elements: (x, y_real and y_imaginary). The code here adds a Smith Chart to the LPF_Lumped.emp example and reads the complex data measurement: 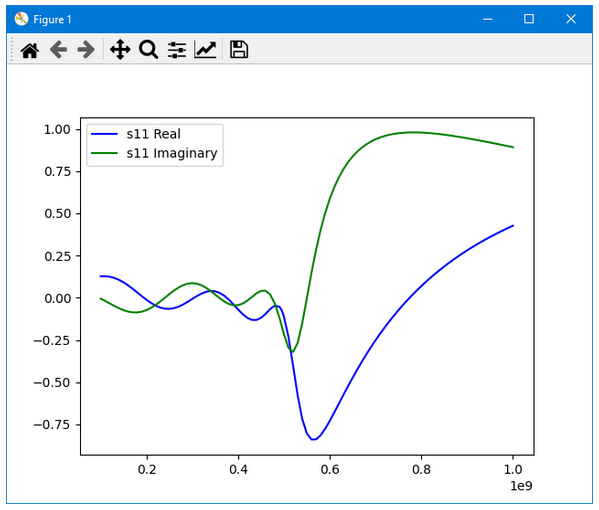 The syntax for reading individual points for the y-axis data would be:

Swept variable simulation is an example of multiple traces in a single measurement. This code first adds a SWPVAR element to the LPF schematic in the LPF_Lumped.emp example and then reads in all the traces from the swept variable s11 measurement. 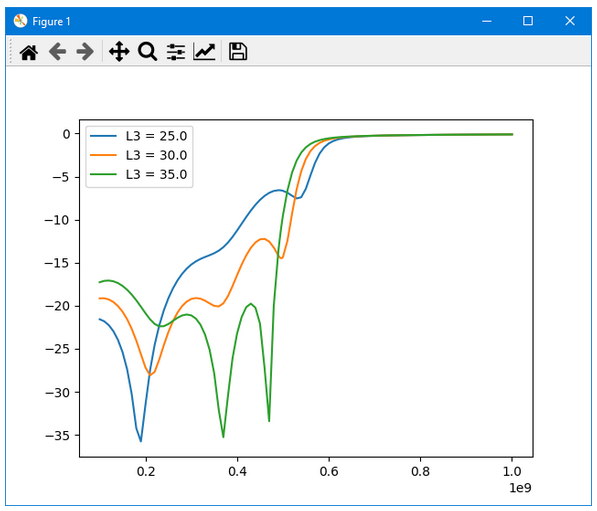 Markers are not part of the Measurement collection, but rather part of the Graph collect. The following code shows how to add a marker to a particular measurement within the graph, get the marker values, set marker to min and max y-axis positions and finally how to use the search marker method

Exporting Data from Python to AWRDE

Exporting data from AWRDE involves writing a text file into the AWRDE project directory. Then plot the data in AWRDE using Data > PlotCol measurement. This code create sine wave x,y points in Python, writes the text file, imports the data in AWRDE and finally creates a graph and plots the imported data: 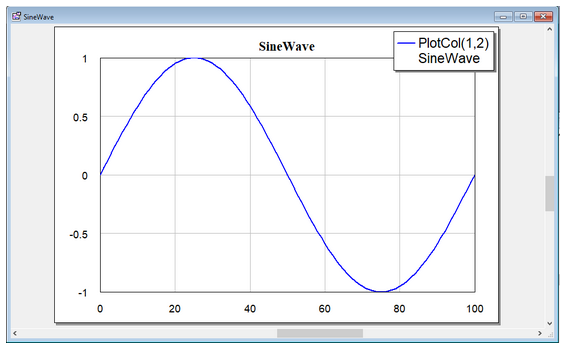